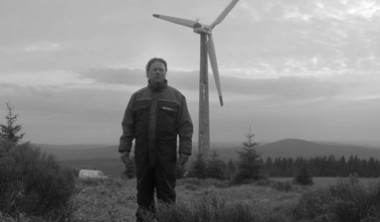 The Avalon Theatre will screen the dark comedy Schmitke on October 11, 2017, at 8 pm, followed by a Q&A with screenwriter Tomáš Končinský. In the film, Julis Schmitke is a wind turbine engineer of few words, employed by a German power company. His life proceeds as usual, until he is invited to Crimeleva, a small mysterious town in the Ore Mountains of the Czech Republic. He travels there to repair a seemingly unrecoverable turbine. However, something lurks behind the bushes—a mysterious growling from the forest. Soon he must deal with the seemingly benevolent village inhabitants as well as the mysterious creatures within the woods. The experiences just might change his life forever. (Dir. Stepan Altrichter, 2014, 97 min., Czech with English subtitles)

Mendel was not a wind turbine engineer, but very interested in meteorology. He monitored wind direction and force, using a flag atop a nearby castle to tell the wind's direction and observing the speed of chimney smoke to calculate force. He was the first to write detailed observations of a tornado, describing it as a “hellish symphony” when one swept past his monastery in Brno on October 13, 1870.

Tickets can be purchased at the door or online at:
http://www.theavalon.org/films/schmitke/
About the Lions of Czech Film Series:
This marks the 11th year of collaboration with the Avalon Theatre to present the Lions of Czech Film Series. This film series gives the Washington, DC, community an opportunity to view Czech films that are popular hits in Europe and have received numerous honors and awards at film festivals. Most of the films have received the prestigious Czech Lion Award, the Czech equivalent of an Academy Award. The Lions of Czech Film Series offers an invaluable opportunity to see the best of Czech cinema in the nation’s capital.
czech.cz
© 2011-2019 Embassy of the Czech Republic in Washington, DC
www.mzv.cz/washington
facebook
RSS