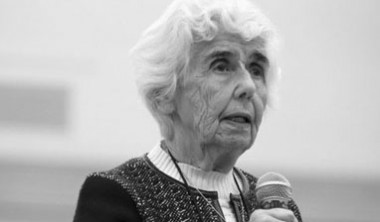 The Embassy of the Czech Republic in collaboration with the Czechoslovak Society for Arts and Sciences will host a special lecture by Holocaust survivor and renowned Czech-American geneticist Renata Laxova on Monday, September 18, 2017, at 6 pm. Laxova will share her childhood story of survival about her escape from Czechoslovakia in a kindertransport, organized by British humanitarian Nicholas Winton on the eve of World War II. She will also talk about her return to her homeland to study and pursue a career in genetics and the ruling Communist Party’s  pseudoscientific take, under the Soviet direction of Trofim Lysenko, on Mendel’s principles of inheritance.

Renata Laxova is a Czech-American pediatric geneticist and an Emeritus Professor of Genetics at the Departments of Pediatrics and Medical Genetics at the University of Wisconsin–Madison. She is the discoverer of the Neu-Laxova syndrome, a rare congenital abnormality involving multiple organs, with autosomal recessive inheritance.

Laxova was born in Brno, Czechoslovakia, into a Jewish family and survived the Holocaust by being included in a kindertransport to England in 1939. After the war, she studied in Brno and received her degrees in Pediatrics (M.D.) and Medical Genetics (Ph.D.) from Masaryk University. In 1968, she escaped a second time to England, where she worked with Lionel Penrose at the 'Kennedy-Galton Centre for Medical and Community Genetics' in London on mental retardation. From 1975 until retirement, she worked at the UWM on her main clinical and research interests mental retardation genetics, genetics counseling, prenatal diagnosis of genetically determined disorders, and cancer genetics. In addition to her participation in many university committees and volunteer activities, she is a member of the Medical School Human Subjects Committee.

RSVP by September 15 to https://renatalaxova.eventbrite.com
Admission is free; however, RSVPs are required.

Embassy policy: No bags or suitcases allowed. Only small purses permitted but will be checked at the door.

No coat check available. You must pass through security for entrance. RSVP confirmation and photo ID required. Doors close at 6:15 pm.

Closest Metro: The Embassy is about a 15-20 minute walk from the Van Ness Metro Station.