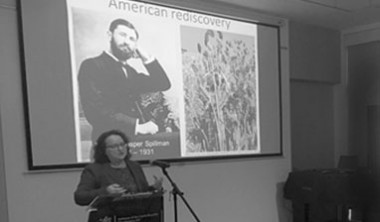 Director of the Mendel Museum Ondrej Dostal and Dr. Marnie Halpern of the Carnegie Institution for Science captivated the audience at the Czech Embassy in the evening on September 27 with fascinating lectures on the work of the founder of genetics – Gregor Mendel – and his impact on America and the world, raising endless possibilities in genetics and medicine as well as ethical questions.

Director Dostal spoke about Mendel’s upbringing and elaborated upon his meticulous 8-year groundbreaking study with nearly 28,000 pea plants, “Mendel had only about 2-3 hours a day for his experiments as the rest of his time was devoted to his duties as monk.” He also noted that Darwin may have been aware of Mendel’s work as Mendel and Darwin had a mutual friend, with whom they corresponded.

Dr. Halpern, who has served on the board of directors of the Genetics Society of America, gave a brief overview of American scientists who rediscovered Mendel’s foundations of genetics and their contributions to the new field of science. She emphasized the positive impact genetics has had on agriculture and medicine as well as the potential enormous impact, particularly via the genome editing technology known as CRISPR, it will have on everyone’s future.

The program ended with a concert documentary screening of Mendel: the Legacy, a recorded video-mapping multimedia extravaganza projected onto the Augustinian Abbey, where Mendel conducted his research in the city of Brno. The video featured animation by Emmy and BAFTA winning animator Drew Berry and was accompanied by a live full-orchestral score by composer Duncan Hendy.