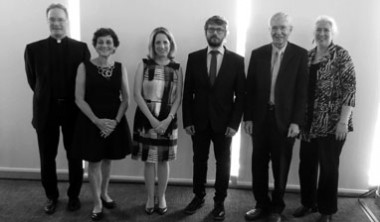 The Kennedy Institute of Ethics at Georgetown University, in collaboration with the Embassy of the Czech Republic, held a symposium with an overview of the founding of genetics by Gregor Mendel as well as  today’s most pertinent issues in genetics and healthcare and their ethical implications inside the stunning Fisher Colloquium at Georgetown University on September 28, 2017.

The symposium, Mendel’s Peas and Today’s Genes: Healthcare, Ethics and Genetics, was opened by Jeffrey Anderson, the Graf Goltz Professor and Director of the BMW Center for German and European Studies in the Edmund A. Walsh School of Foreign Service at Georgetown University. He also welcomed H.E. Hynek Kmoníček, the Ambassador Extraordinary and Plenipotentiary of the Czech Republic to the United States.

The Czech Ambassador acknowledged that, “In our country, if you do something, you are usually famous for it later,” referring to Gregor Mendel’s posthumous recognition as the father of modern-day genetics. These days, “everyone knows the ‘rocket man,’ but the monk who studied green peas?” The Ambassador humorously expressed his appreciation before the audience of geneticists, scholars, students, and captivated professionals.

Next, Ondřej Dostál, Director of the Mendel Museum in the Czech Republic, delivered the keynote address on Gregor Mendel’s work and legacy. Dostál noted that the monk-scientist “loved all animals,” harboring a special interest in mice reproduction.  As this was not looked upon favorably in the monastery, he switched, upon the Abbot’s recommendation, to studying the reproduction of peas, whereby discovering that traits, in the form of recessive and dominant genes, are passed from parents to offspring and established the Law of Segregation and the Law of Independent Assortment. The Czech city of “Brno is the founding site of genetics” and the “Old Abbey in Brno is the site where it was discovered,” Dostál stressed.

The first expert panel discussion began with a lecture by Susan L. Crockin of the Crockin Law & Policy Group, PLLC. Crockin gave a fascinating synopsis of the legal issues surrounding “repro-genetics,” beginning with the first IVF baby in 1978 through today’s baby making processes and implications of genetic testing and selection, even touching upon statute of limitation claims. She admitted that, “law plays catch up to science and technology.”  Hence, Crockin stated that it is important to establish legal definitions. For example, in determining who the mother is, the ‘intention’ may outweigh other factors such as ‘genetics’ and ‘gestation’ in court. Nevertheless, Crockin left the crowd flabbergasted in her closing remark in that the firefighters will save the mothers and babies but not the frozen eggs in the case of fire; thus, once again leaving the waters murky in regards to when life truly begins.

Then, LeRoy B. Walters, Professor Emeritus at the Kennedy Institute of Ethics and in the Philosophy Department at the Georgetown University spoke about Eugenics in Bohemia and Moravia in the years 1915-1945, providing a historical context for the symposium. He addressed the eugenics movements in former Czechoslovakia as well as in the United States and Germany during the early 1900s, listing proposed categories of candidates for sterilization in each country, and raising ethical concerns over the proposed sterilization of groups in Czechoslovakia with “hereditary feeble-mindedness (intellectual disability), severe hereditary nervous and mental diseases (mental illness), severe hereditary sensory deficiencies (such as deafness or blindness), and severe hereditary physical defects (such as limb deformity).” Walters emphasized that “German racial theories about Aryan superiority were always rejected in Czechoslovakia” and no eugenic sterilization law was ever adopted.

After a short break, the second expert panel began with Beth N. Peshkin, Professor of Oncology, Senior Genetic Counselor, Education Director of the Fisher Center for Hereditary Cancer and Clinical Genomics Research, Associate Faculty of the Pellegrino Center for Clinical Bioethics, Georgetown University/Lombardi Comprehensive Cancer Center. Peshkin gave a captivating talk about “Angelina Jolie’s provocative experiences with BRCA1 testing and subsequent surgeries to reduce her risk of breast and ovarian cancer, which raised awareness about hereditary cancer to unprecedented levels.” The Angelina Effect along with the Supreme Court’s decision to invalidate gene patents in June 2013 have made calls for “population screening of women in the US for BRCA mutations.” The audience was in disbelief at the cost of genetic testing for BRCA1 in 1990 as opposed to today’s prices, which make the screenings more accessible.

The last speaker was Kevin T. FitzGerald, a Dr. David P. Lauler Chair in Catholic Healthcare Ethics, Pellegrino Center for Clinical Bioethics, Research Associate Professor of the Department of Oncology at Georgetown University Medical Center. FitzGerald challenged the audience with ethical questions in regards to genomic medicine as well as reiterating the importance of words and their definitions. He especially focused on the definitions of “health” and “healthcare” and what their meanings depict in the societies around the world.

Laura Bishop, Associate Teaching Professor and Academic Program Manager at the Kennedy Institute of Ethics, concluded the symposium with an answer and question conversation, which was followed by a reception serving a Mendelian pea inspired menu, prepared by the Chef of the Embassy of the Czech Republic.