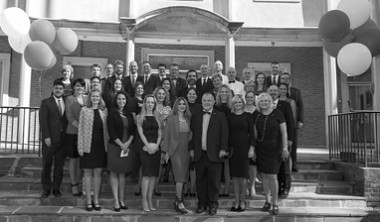 The Embassy of the Czech Republic held a festive celebration to commemorate one hundred years of Czech independence. To mark the historically vital occasion, hundreds of guests filled the main reception hall of the Czech Embassy to hear the welcoming words of Ambassador of the Czech Republic Hynek Kmoníček. The Ambassador underscored the gravity of the moment and its observance in Washington, DC.

He noted that, “Being 100 years of age, the Czech Republic is still young, fresh, and kicking, producing one car every 23 seconds, half of the microscopes in this world, and a lot of beauty. Actually, that is our plan for the next one hundred years – to bring more beauty into the world.”

The date October 28, 2018, marked exactly one hundred years since the Czech people obtained their independence and sovereignty, gaining the right to create a free democratic nation in Central Europe. Their right of self-determination was pronounced in the Washington Declaration on October 28, 1918. Tomáš Garrigue Masaryk, the declaration’s author and friend of US President Woodrow Wilson, would become its first freely elected president.

Reflecting upon the times then and now, Minister of Culture of the Czech Republic Antonín Staněk delivered his insight on the anniversary, declaring, “our commitment to the ideals of freedom and democracy and the values enshrined in Masaryk´s Washington Declaration of Independence remains unchanged.“

Moreover, Ambassador of the United States to the Czech Republic Stephen King added a very touching perspective, speaking about Czech and US collaboration in the fight against terrorism. In particular, he stated that he was personally grateful for the service and protection Czech troops provide to American personnel, such as his son, in Afghanistan.

To complete the program, the world renowned Prague Philharmonic Children’s Choir, consisting of thirty-five youth, performed both the Czech and American national anthems. The complimenting lyrics of the two compositions, “Where is my home?” and “The land of the free and the home of the brave!” was a moving tribute in honor of the momentous day.

During the reception, guests had the opportunity to view a copy of the first handwritten draft of the Washington Declaration by Tomáš Garrigue Masaryk. The documents were provided courtesy of the Masaryk Institute and Archive of the Academy of Sciences of the Czech Republic. Furthermore, visitors were able to take a self-portrait in front a specially designed background to remember the occasion.

The Czech Embassy held the event on Tuesday, October 30, in order to provide convenience for attendance to the hundreds of US and foreign government and diplomatic officials, professionals, and compatriots in the Washington, DC, area.