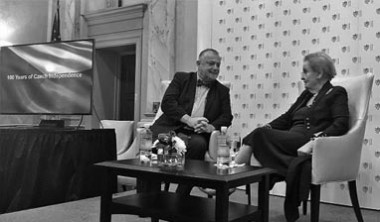 The Embassy of the Czech Republic held a prestigious conference, From Masaryk to Havel and Beyond: The Struggle for Democracy, with keynote speaker former US Secretary of State Madeleine Albright at the Cosmos Club in Washington, DC, on October 18, 2018.

The conference marked the day, exactly one hundred years ago on October 18, 1918, since the Washington Declaration pronounced the independence of a new state in Central Europe. Tomáš Garrigue Masaryk, the declaration’s author and friend of US President Woodrow Wilson, would become its first freely elected president. Ambassador of the Czech Republic to the United States Hynek Kmoníček emphasized the significance of the date in his opening remarks before a full room of guests, representing Czech-Americans with direct knowledge of the Czech nation’s triumphs and tribulations of the 20th century as well as American thinkers and government leaders of today.

Secretary Albright began her keynote speech with remembering President Masaryk for his ideals, which he shared with President Wilson. She noted that Masaryk spent countless hours educating others on how to express nationalism in a constructive manner. She also stressed the principals of the Washington Declaration, which “liberated mankind,” safeguarded the rights of minorities, and placed women on equal footing with men.

In a questions and answer exchange with Ambassador Kmoníček, Secretary Albright, who was born in Prague, responded as to how she felt about her land of birth. She stated that “her heart is Czech” but her “optimism is American.” With that in mind, Secretary Albright discussed the current political status in regards to the European Union as well as the United States. She noted that “globalization is faceless” and yet it is better to have the EU than to have “small countries fighting each other.” Stressing freedoms of speech and the press, she noted that “there will always be divisions in society... but it’s up to the leaders not to exacerbate them.” When the Ambassador asked if democracy had anything in its toolbox for its preservation, Secretary Albright stressed the importance of voting as well as listening to younger generations.

The first panel, moderated by Peter Doran, President and CEO of the Center for European Policy Analysis, focused on the Czech Case in the European and Global context – Are there Lessons to be Learned? Michael Kraus, Frederick C. Dirks Professor of Political Science at Middlebury College, began the discussion by reiterating the importance of the reverence of Masaryk by Americans in 1918 and Wilson by Czechs thereafter. He noted the significance of the original Washington Declaration being pronounced in English, not the native tongues of its authors. Kenneth Weinstein, President and CEO of the Hudson Institute, joined in by offering countless additional Czech and Czech-American individuals who have greatly contributed to transatlantic ties. When moderator Doran directly asked “What does America want the Czech Republic to commit to now?,” Weinstein stressed that the Czechs remain among the closest US allies in the EU and that the US needs to keep looking at the Czechs as key allies in defense and technology.

The second panel, moderated by David Kramer, Senior Fellow at the Václav Havel Center for Human Rights and Diplomacy at the Florida International University, was a lively exchange on the topic of Are There Good 21st Century Tactics in the Battle for Democracy?  Larry Diamond, Senior Fellow at Hoover Institution of Stanford University, delved into the current political situations in Hungary, Russia and the United States, concluding that voting processes were important to achieving change. Heather Conley, Senior Vice President for Europe, Eurasia, and the Arctic at the Center for Strategic and International Studies, underlined that “transparency prevails,” a reference to the Czech motto of “the truth prevails.” She also noted that the political center, stuck between the far right and far left, is too quiet and wished that the power would be given back to the powerless, a nod to former Czech President Václav Havel’s essay. Michael Žantovský, Executive Director at the Václav Havel Library and former Czech Ambassador to the United States, offered a hardheaded approach, stating that “our lack of integrity, responsibility and trust” threatened democracies more than foreign authoritarian regimes. Referencing the discussion of the first panel, he emphasized that “it is our responsibility to keep our house in order.” Moreover, Žantovský hoped that the United States will keep the general framework of security but do better on opening up free trade.

Symbolically, the location of the conference was just a short walk to the statue of Tomáš Garrigue Masaryk in Washington, DC.  Ambassador Kmoníček and Secretary Albright laid flowers before the conference at the statue to pay tribute to the great thinker who authored the declaration, giving independence to Czechs one hundred years ago.