Home » Events » Book Talk: The Soviet Invasion of Czechoslovakia in 1968, The Russian Perspective 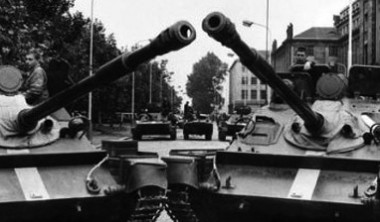 Book Talk: The Soviet Invasion of Czechoslovakia in 1968, The Russian Perspective

Editor Josef Pazderka will present the book The Soviet Invasion of Czechoslovakia in 1968, The Russian Perspective, at the Delegation of the European Union on October 3, 2019, at 6 pm.  The edited collection is the first attempt to take a more coherent look at the Russian perception of the Prague Spring and the Warsaw Pact occupation of Czechoslovakia in August 1968. The publication is therefore a collection of interviews, memoirs and academic studies focusing on Russian soldiers, dissidents and journalists involved in and affected by the Soviet invasion. The book begins with a focus on the Soviet soldiers who came to Czechoslovakia. It depicts their inner world and the mighty machinery of the Soviet propaganda to which they were exposed. Join us at the EU Delegation for an evening taking a closer look at the 1968 Soviet Invasion.

Josef Pazderka is editor-in-chief and lead Czech historian and journalist of Aktualne.

(Entrance on 22nd Street)
RSVP by October 2
https://sovietinvasion1968.eventbrite.com
The event is free, but reservations are required and a photo ID will be requested upon entry.
Please note that this event may be photographed.
czech.cz
© 2011-2020 Embassy of the Czech Republic in Washington, DC
www.mzv.cz/washington
facebook
RSS