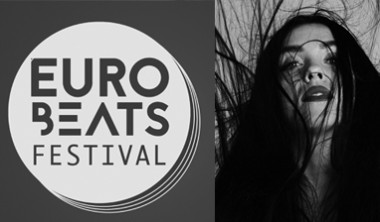 The EUROBEATS Festival will feature 10 European electronic musicians from 10 countries at Union Stage in Washington, DC, from September 27–28, 2019, from 6 pm to 1:35 am. The festival highlights top European artists at the forefront of the electronic music scene. Tickets are free, but RSVP is required. The first night of the festival includes visual artist and chanteuse MIGLOKO (Lithuania), the electric energy and robotic precision of Stockholm-based KISSEY (Sweden), the self-made, electro-jazz drumming wizard CID RIM (Austria), Afro-Portuguese electronic producer and DJ NÍDIA (Portugal); techno aficionado with over 30 releases SAMULI KEMPPI (Finland).

FRIDAY, SEPTEMBER 27
Doors open at 5 pm
MIGLOKO (Lithuania) | 6:15 – 7:15 pm
When MIGLOKO is on stage, the speakers burst with a 3D musical trip through jazz clubs and electronic cities, and a visit to primitive tribes and volcanos of blues along the way. MIGLOKO is deep and visual. Her performances include not just listening, but watching as well.
KISSEY (Sweden) | 7:35 – 8:35 pm
Stockholm-raised, NYC-based artist and music producer KISSEY vibrates a charge of high voltage in her performances, original productions and DJ sets. Her EP Unplug The Delusional Monkey (Fool's Gold) was created together with producer duo Sean C & Lv (Jay-Z, Dead Prez). KISSEY has left her mark on Sundance film soundtracks (Dear White People), art exhibitions (Sputniko!), fashion runway shows (Givenchy), and has a diverse catalog of remixes for the likes of DFA soulman Sinkane and underground rap diva Cakes Da Killa. Generation Watts is a music and wellness website founded and curated by KISSEY.
CID RIM (Austria) | 8:55 pm –9:55 pm
CID RIM (aka Clemens Bacher) is an Austrian electro-jazz drummer based in London. This self-made, jazz-drumming wizard from Vienna has an ear for irregular chords and percussion that is hard earned, with years of dogged dedication to instruments. His music is fresh with the energy of new software. On May 8, he released a new album Control on LuckyMe. Hot off the heels of co-producing Petite Noir's mini-album La Maison Noir / The Black House, the album Control includes two previous singles (“Control” feat. Denai Moore & “Further” feat. Lylit) and two new productions featuring Lylit and Jess Winter.
NÍDIA (Portugal) | 10:15 – 11:45 pm
Nídia is a 22-year-old internationally acclaimed Afro-Portuguese electronic producer and DJ, based out of Vale da Amoreira, south bank of River Tagus, across from Lisbon. As part of the Príncipe Discos record label and community, she has had a decisive role, both as an individual artist and within the collective, in bringing inspiringly progressive aesthetics and ethics to the contemporary alternative dance infrastructure across the globe, and the kuduro culture in particular.
SAMULI KEMPPI (Finland) | 12:05 – 1:35 am
Samuli Kemppi is a Helsinki-based producer, DJ, radio host and a label owner. The techno aficionado with over 30 releases, numerous remixes and gigs from Buenos Aires to Shanghai, Samuli is one of the best-known techno exports from Finland. Kemppi’s musical style draws from the deeper frequencies of techno and experimental music

SATURDAY, SEPTEMBER 28
Doors open at 5 pm
ROCHITE (Romania) | 6:15 – 7:15 pm
Hidden from the naked eye by huge paraphernalia of pagan visuals, the ROCHITE monster has been secretly studying playgrounds for hundreds of years. There is nothing more terrifying than silence, so he is genuinely interested in childhood’s nonsense lyrics and always happy to dial a beat with his long finger. Half-animal, half-ghost, ROCHITE is a white dot suspended between dark blue and dark green, as he’s woven his sound from the weirdest mélange of drumified field recordings, brutal underwater singing, symphonic samples, vintage drum machines and Romanian folk music.
ZAGAMI JERICHO (Czech Republic) | 7:35 – 8:35 pm
Zagami Jericho was nominated as a top newcomer at the Vinyla Music Awards and selected as the most promising Czech act from music export project Czeching by Radio Wave. The latest EP Yours is influenced by UK dubstep with a hint of Japan. She has performed at ESNS 2018, all around CZ and at the biggest and respected festivals including Pohoda (SK), Colours of Ostrava (CZ) and Let it roll (CZ).
PEREL (Germany) | 8:55 pm –9:55 pm
For as long as she can remember, Annegret Fiedler has created electronic melodies to soundtrack her daydreams. Drawing on her early love for brooding synth pop and new wave, she became Perel, an electronic producer, vocalist and DJ who spent much of 2010 shaping her sound. As well as being the first German artist to sign to James Murphy’s seminal dancepunk label DFA Records, Perel has performed internationally as a live act and DJ, from the floors of throbbing techno clubs to major city festivals across Europe.
DJ SPILLER (Italy) | 10:15 – 11:45 pm
Anticipating his return to the US this fall, the original Venetian disco aficionado, DJ Spiller, has topped global record sales of over 2 million records. His seminal "Groovejet" remains an evergreen classic whilst his recent sets continue to keep things fresh within the dancefloors across Europe.
CORA NOVOA (Spain) | 12:05 – 1:35 am
Cora Novoa is a music composer, DJ and Creative Director/Founder of SEEKING THE VELVET (an independent record label of electronic and experimental-pop music, which works by expanding its artistic vision covering areas such as: Art, Music and Design). She has been around in the music industry for more than 10 years, in three different areas: technical, commercial and creative.
czech.cz
© 2011-2020 Embassy of the Czech Republic in Washington, DC
www.mzv.cz/washington
facebook
RSS