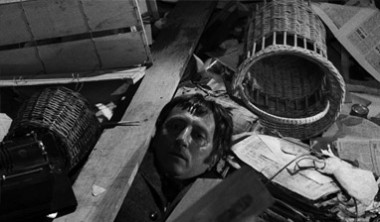 Films: Case for a New Hangman & The Uninvited Guest

The National Gallery of Art will screen The Uninvited Guest and Case for a New Hangman on November 17, 2019, at 4 pm, marking the 30th anniversary of the Velvet Revolution. The film screenings are part of the series Welcome to Absurdistan. The first of two allegories of life in socialist Czechoslovakia, both are imaginative, critical films “banned forever” by the regime. Produced at the Czech national film school FAMU, just months after the Warsaw Pact invasion crushed the Prague Spring, the dark-humored The Uninvited Guest portrays a couple in an apartment block who face a gruff intruder. (Dir. Vlastimil Venclík, 1969, 22 minutes) Case for a New Hangman is unique among the works of the Czech New Wave. Pavel Juráček adapted part three of Gulliver’s Travels into a sci-fi journey through socialist Czechoslovakia. The confining borders, polluted landscapes, perverted justice, and public surveillance of a socialist land transform into an unsettling new world, for discovery (in the film’s alternate title) by A New Gulliver. (Dir. Pavel Juráček, 1969, subtitles, 102 minutes)

Welcome to Absurdistan: Eastern European Cinema 1950 to 1989
Welcome to Absurdistan—more accurately Absurdistán, the Czech phrase that conjures up a distant nonsense land. But in fact, the word signifies the absurdities homegrown in Czechoslovakia and the other former socialist republics of Eastern Europe from the end of World War II until, for most of these countries, the revolutions of 1989. This program marks the thirtieth anniversary of the liberation of these former “people’s republics” from their previously socialist and Soviet-dominated regimes. The shared sensibility of the absurd unites these diverse nations as well as their films. The title of the series recalls the theatrical and literary tradition of the absurd—specifically the famous plays after the end of World War II, and their style of theatrical presentation—but with a significant difference: the Eastern European sense of the absurd brewed over the centuries when the peoples of the region could not determine their fates. The absurd then overflowed in the gaps between the ideals and realities of their socialist states: between the happiness they were supposed to enjoy and material hardships they faced; the failure of basic services, strictures of official culture, pretenses of public life and physical and spiritual confinement. Unlike the aesthetic of the absurd in Western Europe, the absurd in the East was a personal, everyday experience. Each film thus resonates beyond the system that created it, to show how remote certain rights once were and how precarious they remain. Glossy or stark, scathing and playful, these films express the ludicrousness of authoritarian rule through creative varieties of absurdity. We are pleased to present Ukrainian, Lithuanian, Romanian, Polish, Hungarian, Czech, and Slovak films, many in North American premieres of restored prints from their national film institutions. The series is organized in association with Gabriel M. Paletz of the Prague Film School.