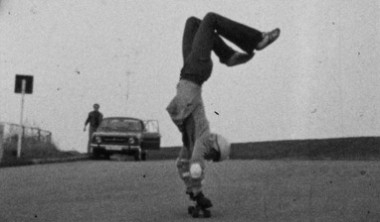 The Czech Embassy will host Senior Policy Advisor in the Office of the DC Deputy Mayor for Operations and Infrastructure Jonathan M. Rogers to speak on urban planning, followed by the screening of the documentary King Skate on October 17, 2019, at 6pm. The program will shed light on skateboarding, from being an expression of freedom in the past to becoming a sustainable mode of urban transportation today.
Starting at 5pm, watch long board demonstrations by The DC Wheels and Bethesda Boards - including local legends Jarrid Lopez and Nick Pappas - at the Czech Embassy's locally famous skateboarding hill as well as on the Embassy's grounds.
About the Film:
Under communist Czechoslovakia, skateboarding was seen as a ‘capitalist sport.’  For the few who dared to ride, it was a revolutionary form of protest and a way to connect with the Western world. The film uncovers this phenomenon through remarkable amateur archival footage, official television broadcasting from the 1970s and ‘80s, and current interviews with the skateboarders who over thirty years ago thrived on adrenaline and nonconformity under the authoritarian regime. Garnering the Czech Lion Award for Best Documentary of 2018, King Skate features Petr Forman, whose Hollywood acclaimed movie director and father Miloš Forman introduced him to his first skateboard, Ivan "The Beast" Pelikán, and World Champion Luděk Váša. (Directed by Šimon Šifránek, 2018, 80 min., Czech with English subtitles)
Trailer: https://www.youtube.com/watch?v=QCda_aVbTRo
About the Speaker:
Jonathan M. Rogers is the Senior Policy Advisor to the Deputy Mayor for Operations and Infrastructure in Washington, DC. In this role, Jonathan develops policy recommendations and formulates strategies to achieve agency outcomes, specializing in safe, sustainable and equitable multi-modal mobility, and green reliable and affortable energy. Jonathan has served in the Government of the District of Columbia for the past seven years including policy positions at the District Department of Transportation, the transition office of Mayor-elect Muriel Bowser, and the budget office of Mayor Vincent Gray. Jonathan was the District's first project manager for Mayor Bowser's Vision Zero initiative for transportation safety. Johathan is a Certified Public Manager, a lean six-sigma green-belt, a former Capital City Fellow, and an AmeriCorps alumnus. Prior to his work in the District Government, Jonathan was an associate at the National League of Cities and earned his Master of Public Policy degree from the George Washington University.
About The DC Wheels
The DC Wheels, a non-profit organization, was founded in 2007 by Washington, D.C., by skateboarder Jimmy Pelletier. Since then, he has hand picked talent from across the metropolitan region and invited them to join him on a mission to meaningfully help those in need. The DC Wheels' mission is to overcome longstanding stereotypes that surround skateboarding by helping others, reinforcing positivity, and supporting a healthy lifestyle.

RSVP by October 16
https://kingskate.eventbrite.com
Admission is free; however, RSVPs are required.
Embassy Security Policy: For entrance, all guests will be subject to security screening. Photo ID is required and must match RSVP confirmation for each individual. No admittance will be permitted without proper registration. Bags and suitcase are not allowed. Only small purses are permitted but must be opened for inspection. Coat check is not available.

Closest Metro: The Embassy is about a 15-20 minute walk from the Van Ness Metro Station.
czech.cz
© 2011-2020 Embassy of the Czech Republic in Washington, DC
www.mzv.cz/washington
facebook
RSS