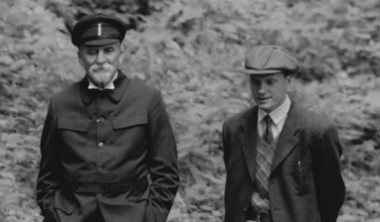 The Avalon Theatre will screen the film Talks with T. G. Masaryk (Hovory s TGM) on October 9, 2019, at 8 pm, as part of the Lions of Czech Film Series. The film follows two leading men of the 20th century - Czechoslovak President Tomáš Garrigue Masaryk and visionary writer Karel Čapek. It reconstrucs a single conversation between the "father of the nation" and the author. In an interview with Czech Radio, the director said, “I wanted to approach these two major figures of Czech history not as they appear in history books – where they are placed on pedestals – but more as real people. Their meeting takes place in a gorgeous park in Topolčianky, where Masaryk had a summer residence and where Čapek visited him. As well as holding a clever, philosophical dialogue, they also silently looked at the countryside and discussed everyday issues." Savor an evening at the Avalon watching this psychological drama. (Dir. Jakub Červenka, 2018, 80 min., Czech with English subtitles)

Event Details:
Date/Time: October 9, 2019, at 8 pm
Venue: Avalon Theatre
5612 Connecticut Avenue, NW, Washington, DC 20015
Tickets can be purchased at the box office or online at
www.theavalon.org.
Lions of Czech Film Series
This marks the 13th year of collaboration with the Avalon Theatre in presenting the Lions of Czech Film Series. This film series gives the Washington, DC, community an opportunity to view Czech films that are popular hits in Europe and have received numerous honors and awards at film festivals. Most of the films have received the prestigious Czech Lion Award, the Czech Republic's highest honor in film. The Lions of Czech Film Series offers an invaluable opportunity to see the best of Czech cinema in the nation’s capital.
czech.cz
© 2011-2020 Embassy of the Czech Republic in Washington, DC
www.mzv.cz/washington
facebook
RSS