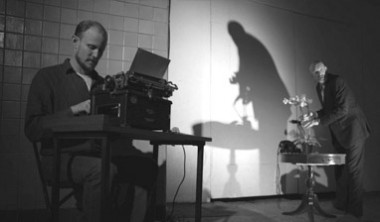 Alliance for New Music-Theatre will open the doubled bill of Václav Havel's seminal play Protest and Susan Galbraith's Vaněk Unleashed, on November 5, 2019, at 8 pm, at the Dupont Underground. In Protest, Vaněk pays a visit to the lavish home of former colleague Staněk, who has invited the renowned activist to help him secure the release of a jailed radical musician, fiancé to his daughter. Vaněk also seeks a favor: the influential man's signature in a far-reaching protest. Vaněk Unleashed is a uniquely American response to the same, most beloved central character of Vaněk. In this work, Alliance adds to the tradition that includes playwrights Samuel Beckett and Tom Stoppard of paying tribute to Havel by making Vaněk a universal character. Audiences will find Vaněk still struggling with issues of the slipperiness of identity as he careens imaginatively between prison and the more terrifying and absurd world outside. Step inside the Dupont Underground as we explore a play performed in the underground and one inspired by Havel's endearing character.

Venue: Dupont Underground
Entrance located at 19 Dupont Circle, on the NE side of the circle next to the Starbucks.