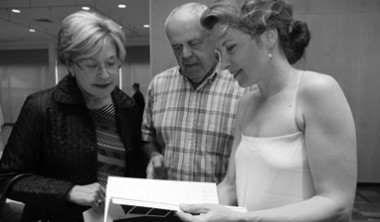 The book in its published form is meant for all ages. It explores modern Czech cultural identity, using each letter of the alphabet to represent keywords in topics such as history, technology, gastronomy, geography, art, and design.
“Together with illustrators and graphic designers Adam Macháček and Sébastien Bohner, also living abroad, we were trying to capture and describe the Czech culture of childhood or at least to sketch it. We can also call it national cultural identity. Living abroad helped us to get a new perspective on our own country, a bird’s eye view,” said Šedivá.
Via concise descriptions and chic graphics, the book encompasses all one needs to know about the Czech Republic and its people. The book has 257 entries, organized alphabetically and 28 letters of the alphabet. With each letter, there is a task, song, and sometimes a proverb or fairy tale character.
“Through the book, we were able to dive into the deep water of our history, to touch with lightness its painful moments, to point out with humor our national specifics, like Jára Cimrman (the admired and celebrated greatest Czech, who never existed) and cover different elements ranging from gastronomy and geography to design and art.”
The book won The Most Beautiful Czech Textbook Award 2018, organized by the National Literature Monument and the Ministry of Culture in the Czech Republic.
“ABCZ is not meant as an encyclopedia – more as a mosaic of pictures, memories and ideas about our country by (and for) those who are far from home. And also for everyone who for whatever reason is interested in Czech culture and wants to understand us more, ” she said.
She will continue her book tour with workshops at American Sokol Washington, D.C., and the Czech Schools in Durham, Atlanta, Pittsburgh, Baltimore and Philadelphia.
For more information about the book, please visit:
http://www.denisasediva.cz/en/.
czech.cz
© 2011-2020 Embassy of the Czech Republic in Washington, DC
www.mzv.cz/washington
facebook
RSS