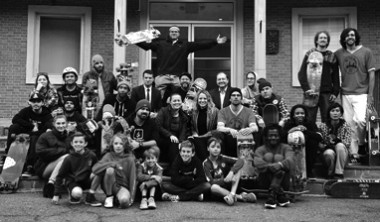 The Embassy of the Czech Republic in Washington, for the first time ever, hosted a unique happening with skateboarders doing bold demonstrations down DC’s famous hill, followed by a talk and documentary on skateboarding on October 17, 2019.

Riders from the non-profit organization The DC Wheels and Bethesda Boards came out to tackle the grounds of the Czech Embassy, doing gnarly demos on rails and ramps. Nick Pappas, a stunt double in a recent Vin Diesel movie, then led long board demos down the legendary hill in front of the Embassy at unimaginable speeds. Eager youngsters gathered to speak to Jimmy Pelletier and Jarrid Lopez in admiration of the skaters’ athletics, skills and courage.

The demo was followed by a talk by Jonathan M. Rogers, the Senior Policy Advisor in the Office of the DC Deputy Mayor for Operations and Infrastructure. He spoke about how skateboarding is recognized not merely as a sport but also as a sustainable form of urban transportation. He informed about the District’s past and future plans in embracing skateboarding in its recreational and commuter forms.

Lastly, the Czech Embassy screened the film King Skate that inspired the happening itself. Garnering the Czech Lion Award for Best Documentary of 2018, King Skate features Petr Forman, whose Hollywood acclaimed movie director and father Miloš Forman introduced him to his first skateboard, Ivan "The Beast" Pelikán, and World Champion Luděk Váša. Through current interviews and incredible amateur archival footage, the skaters depict what it was like to skate under communism in former Czechoslovakia, stressing that skateboarding was a revolutionary form of protest and a way to connect with the Western world.

After the film, the local riders expressed awe of the daring skaters, incredible stunts, and challenging times in the 1970s and 80s. The evening was a true mutual transatlantic exchange of inspiration.