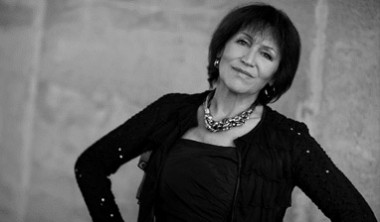 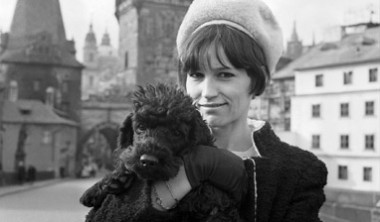 Marta Kubišová was born on November 1, 1942, in České Budějovice, during the height of WWII. She lived with her grandparents, mother, father, and brother. As a child, she fondly remembers picking cherries with her brother and running home from the local pub with cold beer for her grandfather. She enjoyed riding horses and started playing the piano at the age of ten. She wanted to become a physician. As the communists strengthened their grip over the country, the family moved to Poděbrady. Her father was a cardiologist. He closed his practice in 1953 because he did not want to comply with the regime, leading to his imprisonment for 3-6 months. Her mother was a housewife. Marta dreamed of studying at a university, but was told to find work in a factory because she would not be “approved” for higher education. While working in a glassworks factory, she tried three times in vain to get into a university. Upon the third rejection, her boss told her to hand in her resignation. With no job prospects or schooling, she did not know where to turn. Her mother saw that a theater in Pardubice was looking for a singer/actress and encouraged her to audition.
Marta Kubišová in Prague - March 3, 1967
Photo credit: CTK 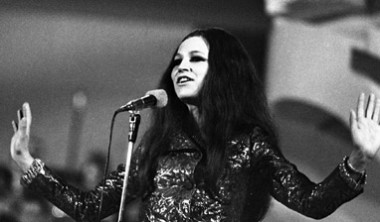 Marta learned to sing listening to Radio Luxembourg with her brother and tried to play hits on the piano by such artists as Elvis Presley and The Beatles. She had a knack for phrasing lyrics in Czech and a unique, original, distinct color to her voice with the ability to convey emotions when she sang. In 1961, Marta participated in her first talent show called The Search for Talent, reaching the finals. At her audition at the theater in Pardubice, she caught the eye of composer and future Supraphon producer Bohuslav Ondřáček. She went on to sing with the Alfa Theatre for one season before signing a contract with the prestigious Rokoko Theatre in Prague. There, she performed with Czechoslovak superstar Waldemar Matuška as well as Helena Vondráčková and Václav Neckar, who later became part of her trio. At the Rokoko theatre, Marta, Helena and Václav performed in a new musical called Waiting for Fame, which brought them instant success. Marta’s first solo album Songy a Balady was released in 1969, and re-released in 1989, along with a compilation of old songs titled Lampa. The album mixed pop with funk and included a Czech-language version of Hey Jude by the Beatles. Marta was one of the most popular female singers in the 1960s, winning the Golden Nightingale Award three times – 1966, 1968, and 1969. 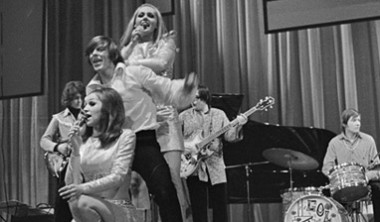 During Prague Spring of 1968, a period of political liberalization spread across the country with the election of Alexander Dubček. He established “communism with a human face,” loosening restrictions on media, speech and travel throughout the country. An air of freedom reverberated and rock and roll reinvigorated the nation. In 1968, Marta was part of this pop boom, singing with the blonde bombshell Helena Vondráčková and singer Václav Neckář, who had a flair for comedy. The trio, known as The Golden Kids, propelled Marta’s career to an all-time high. The group recorded numerous singles and two albums Micro Magic Circus and Music Box No. 1 (Golden Kids 1). Their repertoire included original compositions as well as covers of international hits with Czech lyrics. The group also toured the country. Marta even met Aretha Franklin when she was in Paris performing for a month at The Olympia during the height of Prague Spring. During this air of freedom, she also openly supported Alexander Dubček, the leader of Czechoslovakia at the time. However, the golden days were not to last. The last performance of The Golden Kids took place on January 27, 1970, in Ostrava. The trio was scheduled to perform a series of concerts at the World Ski Championship in Slovakia. Shortly before their departure, allegations arose against Marta on trumped up charges alleged by the communists. This spiraled Marta’s career into darkness for the next 20 years.
The Golden Kids - Marta Kubišová, Václav Neckář and Helena Vondráčková, 1969.
Photo credit: CTK 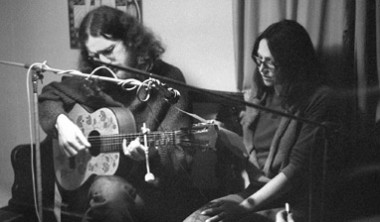 On August 21, 1968, tanks rolled into Czechoslovakia from Warsaw Pact allies crushing the liberal reform known as Prague Spring. A Prayer for Martha (Modlitba pro Martu) became the anthem of occupied Czechoslovakia. Originally, the song written by Petr Rada was created for the popular TV series called A Song for Rudolf III. The ballad took on new meaning as tanks rolled into the country. Marta recorded the poetically poignant song singing, “Peace with this country should forever stay. Let anger, envy, grudge, fear and strife cease.” The communists later banned the song from the airwaves. With that song, Marta became the face for the opposition to the Soviet occupation. While cameras rolled, she also showed her support for Dubček by kissing him on the cheek and wanting to give him her lucky momento, which she lost along the way to the visit – perhaps a foreshadowing of the events to follow. “Not just me, everybody thought they (the Soviets) would be gone in two years at the latest. And they were here 10 times that long,” said Marta Kubišová in an interview with Czech Radio.
Marta Kubišová
Photo courtesy of the Václav Havel Library 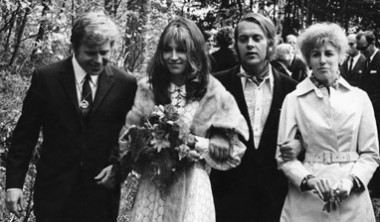 In 1970, Marta married Czechoslovak New Wave film director Jan Němec, a rising star on the directorial scene with cinematic gems such as Diamonds of the Night (1964), A Report on the Party and Guests (1966), as well as the documentary Oratorio for Prague, capturing the Soviet-led invasion. Marta secured her first film contract in his film Martyrs of Love (1967), making a cameo appearance. Later, Němec made several short films for her songs. In the recent documentary Magic Voice of a Rebel, Marta spoke about her life with Němec saying that he really loved her and that when the Czechs beat the Russians in the Ice Hockey World Championships, he was so elated that he wanted to write her initials in bullets in her bay window. Their love though was not to last. The communists saw not only Marta but also her husband as a red flag to the regime. Barrandov Film Studios blacklisted him. They retreated to Němec’s home village where Marta found employment in a factory, and he worked as a tractor driver. Němec saw no opportunity to continue his directorial career and eventually emigrated, but Marta chose to stay and the couple divorced. She married director Jan Moravec a couple years later.
Marta Kubišová (center) with Václav Havel (left), Jan Němec (right), and Olga Havlová
Photo Courtesy of the Václav Havel Library 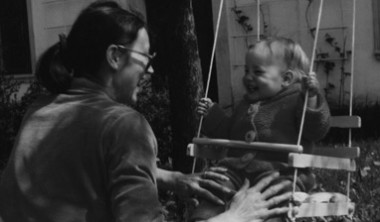 During the “normalization” of the country, strict censorship took control of the country. The government banned Marta from performing on allegations of pornography. The state booking agency Pragokoncert started circulating doctored photos of Marta in a pornographic magazine, which appeared to show Marta in the nude. Marta took the agency to court for defamation and won, but her career was ruined. For 20 years, communists blacklisted her, completely ostracizing her from the music industry. She was told that if she would support normalization that she could sing again. Instead, she did a series of menial jobs. Václav Havel, a family friend who later became president of the country said, “She wouldn’t sing if it meant making compromises.” She ended up finding a job gluing bags together for toys. With her last royalty from Supraphon, she bought a washing machine. In the midst of all of this, she also lost a baby in the eighth month of her pregnancy and survived clinical death. She never gave in to the communists. On June 1, 1979, Marta gave birth to her daughter Kateřina who filled her life with new meaning, joy, and strength.
Marta Kubišová with her daughter Kateřina
Photo credit: www.martakubisova.cz 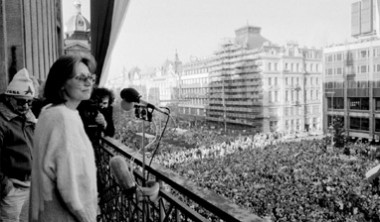 During her time as a dissident, the communists banned her music from the airwaves, but Radio Free Europe’s Czechoslovak Service kept playing her music to viewers who managed to tune in. She also auditioned to sing vocals for the Plastic People of the Universe (PPU), a Czech underground rock group who were imprisoned for not conforming their sound to the regime. The secret police prohibited her from collaborating with the rock group saying they would make her life extremely difficult. She also was a signatory of the human rights manifesto Charter 77, and its spokesperson for a year, which brought even greater scrutiny. The secret police even utilized the help of her second husband Jan Moravec, who monitored her for them. Later, she helped lead the 1989 Velvet Revolution with her signature ballad A Prayer for Martha, singing from a balcony above Wenceslas Square on November 21, 1989. The revolution restored freedom and democracy to the nation and marked her return to the stage. In regards to the thousands gathered to see her during the Velvet Revolution, she said in an interview with Prague Radio, “I didn’t cry, I was overcome by the sheer sight of the whole square jammed with people. I said to myself, no singer ever had a comeback like this! Foreign film crews told me people were in tears and when they asked what are you crying for, they said, it’s that woman…” 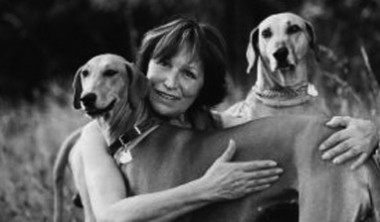 In addition to returning to music following the revolution, Marta also focused on her love for animals. In 1992, she began hosting a show about abandoned pets called Do You Want Me? (Chcete mě?). The program pairs animals for adoption with viewers. Since the age of 25, Marta has been surrounded animals. First, she had two poodles, then some cats and then a donkey. Throughout her life, she has campaigned for the protection of animals and wildlife and is an honorary member of the non-profit organization Animal Protection Institute (Institut Nadace na ochranu zvířat), which she founded in 2005.
Photo credit: www.martakubisova.cz 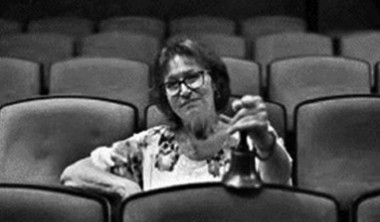 In 1995, President Václav Havel awarded Marta with the Medal of Merit and the Honorary Medal of T.G. Masaryk (1998). Writer Adam Georgiev published a biography of her life called Chasing the Sun (Chytat slunce). The Czech Academy of Popular Music inducted her into its hall of fame in 1998. She won the prestigious Thalia award in 2002 for her role in the Czech adaptation of Andrew Lloyd Webber’s musical Tell Me on a Sunday. In 2008, she was awarded a lifetime achievement award. Ultimately, she performed her last concert in her hometown of České Budejovice on November 1, 2017, coinciding with her 75th birthday. Her immortal ballad, A Prayer for Martha, won Czech Radio’s Hit of the Century poll in 2018. When asked what her message is to future generations, she said in an interview with the Prague Monitor, “Always want the truth, because without it there is no freedom.”