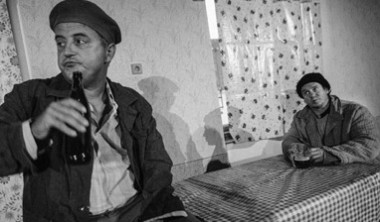 In honor of the 30th anniversary of the Velvet Revolution, the Davis Performing Arts Center joins the Czech Embassy in hosting Kašpar Theater Company's performance of Václav Havel's Audience, featuring director and actor Jakub Špalek, and Jan Potměšil, who was a student activist in Prague in 1989. Following the play, the visiting artists join Georgetown students who visited the Prague Quadrennial and studied with Švanda Theater for a free ranging talk about Prague then and now, as well as collaboration and activism.

Event Details:
Date/Time: October 2, 2019, at 7 pm
Venue: Devine Studio Theatre
Davis Performing Arts Center
Georgetown University
37th and O St., N.W., Washington, DC
RSVP by October 1 to
https://playaudience.eventbrite.com
Audience
Playwright: Václav Havel, directed by: Jakub Špalek
Cast: Jan Potměšil and Jakub Špalek
Audience belongs to a trilogy of partly autobiographical one-act plays also known as the Vaněk Trilogy, comprising Audience (1975), Protest (1978) and Mistake (1983), based on Havel’s experience of being forced to work in a brewery and under constant harassment from the communist regime. Taking place in the brewery’s office, Audience is a meeting between the brewery’s manager Sladek and employee Vaněk. While the manager is clearly opening too many beers and inducing binge drinking, it is less clear what he wants from Vaněk, though it ultimately transpires he has a deal to offer.
Kašpar Theater Company in Celetna, Prague, Czech Republic
Jakub Špalek established the Kašpar (Jester) Theater Company in 1990. Its repertory includes classical plays such as Cyrano and Richard II as well as plays by contemporary playwrights like Friel, Kelly, Ives, Villquist, O’Rowe, McDonagh, Vyrypayev.
After many years on their permanent stage at Celetná Theater, the Kašpar Theater Company decided to open a new venue called the Clubhouse. They used this new space to renew the tradition of “Apartment Theater.” Originally, “Apartment Theater” involved the performance of a play inside a house or apartment. It developed during the communist era as a way for performers to stage forbidden productions while avoiding the censorship of the government. Under the slogan “we can’t get closer” the Kašpar Theater Company presents twelve plays in the Clubhouse, including Audience by Václav Havel. Following the tradition of “Apartment Theater,” the company puts on these productions with small audiences in the more confined spaces offered by their new venue. These plays are “the private pleasure and enjoyment” of the company.
Jakub Špalek
A distinctive, hard-headed, talented actor, director, and principal, Jakub Špalek is a boss who puts his heart and emotions into everything. In 1990 he founded the Kašpar theatrical association, and five years later Celetná Theater where Kašpar and other ensembles perform. He is a trained actor who also directs.
Jan Potměšil
In the summer of 1989, Jan Potměšil finished his studies at the Theatre Faculty of the Academy of Performing Arts in Prague and joined Vinohrady Theater. Later that year, he met up with students and actors who were going to Ostrava to persuade the miners to support the Velvet Revolution. On the way back, his car crashed on a frozen road. Since then, Potměšil has been paralyzed from the waist down and uses a wheelchair. He has performed in the role of several major characters in plays at Kašpar Theater; the most notably Charlie Gordon in Flowers for Algernon (more than ten years in the repertoire), the title role in Richard III (for which he received the Alfred Radok Award for Best Actor), Jesus in Felix Mitterer’s Trouble in the House of God, and Polonius in Hamlet.
czech.cz
© 2011-2020 Embassy of the Czech Republic in Washington, DC
www.mzv.cz/washington
facebook
RSS