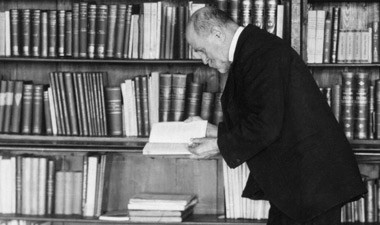 The 1920's saw the building of a new democratic nation in the heart of Europe. With the strong backing of US President Woodrow Wilson, Czechoslovakia had declared its independence in 1918, and Tomáš Garrigue Masaryk became its first freely elected president. In this inter World Wars period, the First Republic from 1918 to 1938 prospered socially and economically, becoming one of the most advanced countries in the world. (Photo credit: The National Museum in Prague)

Tomáš Garrigue Masaryk (TGM, 1850-1937) was a Czech statesman, sociologist, and philosopher. He was an advocate of Czechoslovak independence during World War I and became the first President and founder of Czechoslovakia.

After teaching philosophy at the University of Prague for several years, Masaryk served in the Parliament from 1891 to 1893 and again from 1907 to 1914, during the times of the Habsburg Austrian-Hungarian Empire. When the First World War broke out, he had to flee the country to avoid arrest for treason and ended up in England, where he started to agitate for Czech independence from Austria-Hungary. In 1916, he went to France to convince the French government of the necessity of disintegrating Austria-Hungary. After the February Revolution in 1917, he proceeded to Russia to help organize Slavic armed resistance to the Austrians, the so-called Czechoslovak Legions. Finally, in 1918, he traveled to the United States, where he convinced President Woodrow Wilson of the rightness of his cause. On October 18, 1918, Masaryk, standing on the steps of Independence Hall in Philadelphia, proclaimed Czechoslovakia's independence.

With the fall of the Austro-Hungarian Empire in 1918, he became the first President of newly independent Czechoslovakia. He was re-elected three times and held office until December 14, 1935, when he resigned owing to bad health. Edvard Beneš succeeded him. Masaryk enjoyed almost legendary authority among the Czech people.

A large statue of Czech President Tomas Garrigue Masaryk stands in Washington, DC, at the intersection of Massachusetts Avenue and 22nd Street. The statue was erected by the American Friends of the Czech Republic (AFoCR). For more information about AFoCR, please visit www.afocr.org. A smaller replica stands before the Embassy of the Czech Republic.