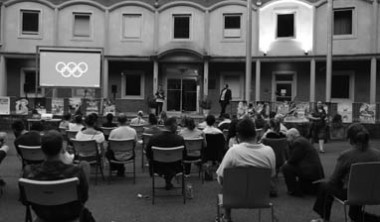 
Tyler Lopinsky of Sense Arena facilitated virtual hockey for the attendees! Sense Arena specializes in virtual reality applications, which are used for training and education purposes in hockey. Sense Arena is a cognitive training platform for athletes looking to gain a competitive edge, by helping players find their mental edge. It is designed by innovative hockey leaders and used by professional players and goalies across the whole world. All ages partook in defending the goal!


The community came together to celebrate the Czech Republic, ice hockey, and one of the most defining moments of modern Czech history: the victory at the 1998 Winter Olympic Games’ Ice Hockey Tournament. Trivia winners even received collecters' cards signed by Czech hockey player Michal Kempny of the Washington Capitals!