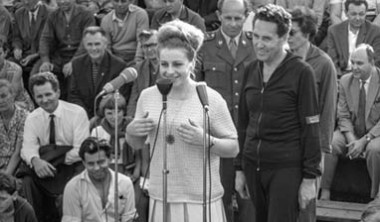 Throughout her life, Věra fought for her extraordinary achievements and moral convictions. After the fall of Communism in 1989, she served as an adviser to President Václav Havel. She also received the United Nation’s Pierre de Coubertin Prize for promoting fair play in 1989 and the Olympic Order. She credited Václav Havel, Pope John Paul II, and the Tibetan spiritual leader, the Dalai Lama, for having a great impact on her life. In regards to her gymnastics legacy, U.S. Olympic gold medalist Bart Conner said, “She was one of the most dominant gymnasts of her time, balanced in all the events and completely comparable to someone like Simone Biles.” Her charisma carried with her throughout her life. In 2012, she made a special appearance at the Mexican Open, doing a perfect split at the age of 70, loved by the Mexican audience. Just four years later, she passed away at the age of 74, on August 30, 2016, after a battle with pancreatic cancer. British gymnast Mary Prestidge said to the LA Times following her death, “She was seen to be much more than just a gymnast or a sportsperson... She was going to be champion of the world and not sign away her political allegiance either... bravo!" She remains one of the most celebrated Olympians today.