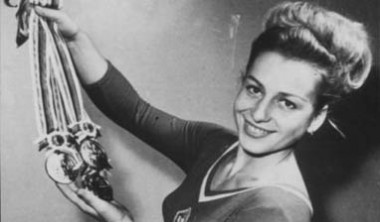 Věra Čáslavská remains one of the greatest Olympians of all-time. She is a seven-time Olympic gold medalist, four-time World Champion, and eleven-time European Champion. In 1968, she was named the world’s best athlete and the second most popular woman on the planet after Jacqueline Kennedy. She is the only gymnast, male or female, to have won an Olympic gold medal in each individual event. After the Velvet Revolution, she served as advisor to President Václav Havel, President of the Czech Olympic Committee (1990-1996) and a member of the International Olympic Committee (1995-2001). Called Zlatá Věra (Golden Věra), she won 140 medals, 22 of them gold at the Olympic Games, World and European Championships. In 1991, she was inducted into the International Women’s Sports Hall of Fame and the International Gymnastics Hall of Fame in 1998. Her legacy will be remembered for her athleticism and grace, fight for freedom and democracy, and promotion of an active lifestyle and physical education for youth through the Věra Čáslavská Foundation.

Věra Čáslavská poses with the medals she won at the Olympics in Mexico City in 1968. Photo courtesy of the National Museum in Prague