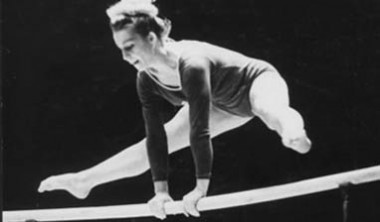 Born during WWII on May 3, 1942, Věra Časlávska was the last of three daughters, including Hana and Eva. She grew up in the Karlín district of Prague, in an apartment building next to a tram. As a child, the rumbles of the tram frightened her at night, reminding her of the air raids during the war. In 1945, her brother Vašek was born. She often pushed him in a carriage in a park across the street from where her parents worked. Her father ran a small grocery shop, which was seized by the Communists in 1948. Money proved tight at times, but her mother enrolled her and her sisters into language and dance classes, with dreams of them becoming prima ballerinas for the National Theatre. At the age of seven, Věra took up figure skating and even won the Youth Figure Skating Championship in Prague. By the age of 15, she transitioned from figure skating into gymnastics, training with renowned gymnast Eva Bosáková. At 16 years old, she debuted at the World Artistic Gymnastics Championships in 1958, winning a silver team medal. She gained her first individual gold on the vault at the European Championships the following year. In her gymnastics, she introduced a strong acrobatic style to a sport known for being dance-oriented.