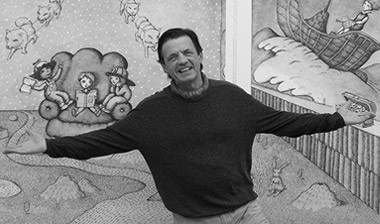 The internationally known children’s illustrator Peter Sís began his career as a filmmaker in former Czechoslovakia . He was sent to the United States by the government in 1982 to work on an animation for the 1984 Summer Olympics. In 1983, he collaborated with Bob Dylan on You Got to Serve Somebody. Yet, upon meeting American writer Maurice Sendak, Sís found a new passion. Becoming a prolific author and illustrator, he is a seven time winner of The New York Times Best Illustrated Children’s Book of the Year and received the MacArthur Fellowship in 2003. Peter Sís is being recognized in 2012 on behalf of the Czech Republic with the “nobel” prize for children’s literature, the biennial Hans Christian Anderson Award. The Ministry of Culture of the Czech Republic awarded him as well in 2012 with the Artis Bohemiae Amicis. His latest works may further be seen on murals at the Baltimore Washington International Airport and NYC's 86th Street Lexington Avenue subway station and even on posters designed for the NYC subway system. Petr Sís also designed the famous poster for director Miloš Forman's Oscar winning motion picture Amadeus.