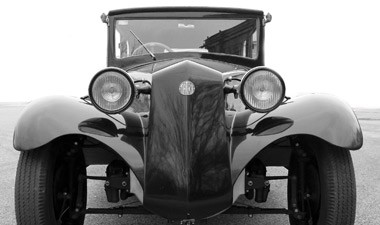 TATRA, a.s., a Czech company founded in 1850, ranks among the oldest truck and car companies in the world. In 2010, a 1941 TATRA T87 won the "Most Collectible Car of the Year" in the NY Times. TATRAs were known as the 'Czech Secret Weapon' during WWII for the scores of nazis who died behind these fast wheels, prompting Hitler to ban his top officers from driving them. During the Cold War, TATRA continued to manufacture trucks, buses, and a luxury car, which was reserved for national and foreign communist officials (including Fidel Castro). The company's current models consist of transportation and heavy duty off-road trucks.
Photo courtesy of Lane Motor Museum