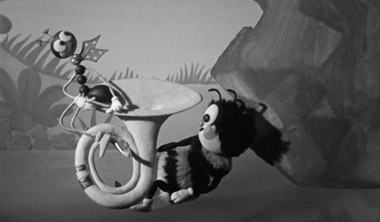 The Embassy of the Czech Republic will present, in connection to the V4 Film Series, a selection of Czech classic cartoons curated by the Czech National Film Archive on view online until October 28, 2020. The films include Ferda the Ant in the Foreign Service, 40 Grandfathers, Two Balls, among others. Savor a Saturday watching cartoons created by Czech traditional animators.

Event Details:
Online screening
Dates available online: October 22-28, 2020
The film can be screened in the U.S. only!
Register at:  https://conta.cc/3nWnvdl
About the V4 Film Series:
The V4 Film Festival runs online from October 15-28 and will feature contemporary cinematic gems including Corpus Christi (Poland), Havel (Czech Republic), Bet on Revenge (Hungary) and Amnesty (Slovakia), as well as a Kids Corner of cartoons from each of the countries. We invite you to join us on a riveting journey to Central Europe through a number of contemporary cinematic gems from Poland, the Czech Republic, Hungary and Slovakia. Great neighbors with strong cultural ties, the four countries are known as the Visegrad Group (Visegrad 4 or V4) - an alliance established in 1991 to further integrate our region and increase our political, economic and cultural cooperation. This year, Poland assumed the Group’s annual, rotational presidency, aiming to actively promote Central Europe and the V4 as a strong regional and global partner. This year’s Visegrad 4 Film Series, now in its ninth iteration, is brought to you virtually and available to audiences across the United States!