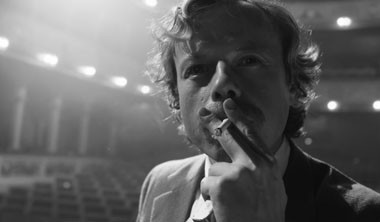 Director Slávek Horák's biopic Havel will screen online until October 28, as part of the V4 Film Series. The film follows Václav Havel's life during Prague Spring (1968) and the Velvet Revolution (1989) to ultimately his presidency. Variety film critic Alissa Simon wrote, "This creative biopic of the playwright who became prsident...doesn't let pesky facts get in the way of a good story." Delve into this new film from the comfort of your couch, exploring the life of an extraordinary man.

Like Comenius, Havel fought hard for the rights of the Czech people. Both were leaders, who strove for truth and the hope of nations living in harmony during times of adversity.

The film can be screened in the U.S. only!

About the V4 Film Series:
The V4 Film Festival runs online from October 15-28 and will feature contemporary cinematic gems including Corpus Christi (Poland), Havel (Czech Republic), Bet on Revenge (Hungary) and Amnesty (Slovakia). We invite you to join us on a riveting journey to Central Europe through a number of contemporary cinematic gems from Poland, the Czech Republic, Hungary and Slovakia. Great neighbors with strong cultural ties, the four countries are known as the Visegrad Group (Visegrad 4 or V4) - an alliance established in 1991 to further integrate our region and increase our political, economic and cultural cooperation. This year, Poland assumed the Group’s annual, rotational presidency, aiming to actively promote Central Europe and the V4 as a strong regional and global partner. This year’s Visegrad 4 Film Series, now in its ninth iteration, is brought to you virtually and available to audiences across the United States!
czech.cz
© 2011-2021 Embassy of the Czech Republic in Washington, DC
www.mzv.cz/washington
facebook
RSS