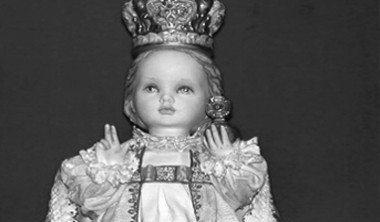 The Infant Jesus of Prague is a revered symbol and a sixteen century statue of the chid Jesus located in the Church of Our Lady of Victory i the Karmelitska Street in the Little Quarter of the Czech capital. During the plunder of the Thirty Years' War in 1631, the statue was damaged and forgotten. When found years later, legend has it that by miracle, its spirit spoke, "Have pity on me, and I shall have pity on you. Give me my hands, and I will give you peace." Since then, the Infant's many devotees, local and international, speak of its miraculous powers; so much so that a porcelain statue of the Infant Jesus of Prague was donated to the Basilica of the National Shrine of the Immaculate Conception in Washington, DC, in 1960. Pope Benedict XVI granted a Canonical Coronation to the Infant in 2009. Most recently, even Hollywood alluded to its powers in the last scene of the Academy Award winning film Argo.