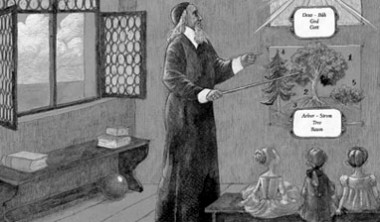 Yearning to continue his writings, Comenius returned with his family to Leszno in 1648. Yet, tragedy stuck again just two days upon their return with the death of his wife. In sorrow, Comenius wrote the Testament of the Dying Mother: The Unity of Brethren, encouraging Czechs not to give up hope for self-governance. Left caring for his young children alone, Comenius married, for the third time, to Jana in 1649 and took his new family to Hungary to put his pansophic system into practice. To heighten curiosity and imagination, Comenius encouraged teaching through playing as learning should be enjoyable. He wrote several theater plays for his pupils in School as Play. Moreover, he penned his most influential work yet, The World in Pictures. It was the first illustrated language textbook in the world and was translated into twelve European languages, becoming the most popular children’s textbook for the next hundred years and more. It was printed in the United States until 1887!