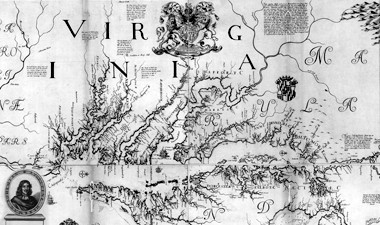 The very first map of the United States of Virginia and Maryland was produced in 1670 by Augustine Herman, a prominent merchant and cartographer from Bohemia in today’s Czech Republic, who settled in the new world. While in the employment of Lord Baltimore, Herman produced an incredibly accurate map of the Chesapeake Bay and Delaware Bay regions in exchange for permission to establish an enormous 30,000 acre plantation in what is now southeastern Cecil County, Maryland. He named his plantation Bohemian Manor, building the manor north of the Bohemian River. Herman’s descendant and inheritor of the plantation was Richard Bassett, one of the Founding Fathers of the United States and signers of the United States Constitution.  Today, a high school and middle school are named after the plantation Bohemian Manor.