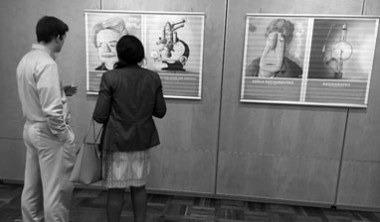 Czech Scientists and Their Inventions

The engaging and educational exhibition Czech Scientists and Their Inventions was opened at the Embassy of the Czech Republic on the evening of October 10, 2017. The opening was preceded by a very perceptive lecture by Dr. Jakub Kostal, Assistant Professor of Chemistry at The George Washington University. The audience had the opportunity to learn about great Czech scientific triumphs, including a Nobel Prize recognition for chemistry, thanks to the exhibit from the Czech Academy of Sciences.

The exhibition is one of the successful projects of the Open Sciences Program of the Czech Academy of Sciences, based in Prague. It is composed of caricatures of leading Czech scientists and their most famous discoveries by illustrator and director Přemek Ponáhlý. The original graphic design presents outstanding historical and contemporary Czech male and female scientists via a humorous and hyperbolic depiction. It also underlines times when education and qualified professional employment of women in science was no less than revolutionary. Despite the setbacks, a number of female pioneers did not give up and made it into the history of Czech science and research.

The exhibition was opened by Dr. Jakub Kostal, Assistant Professor of Mathematical Chemistry at the George Washington University, who provided comparative as well as personal insight into the education and research systems in the United States and the Czech Republic. Dr. Kostal is also a Co-Founder of DOT Consulting, LLC, a company that develops and markets toxicity prediction tools. His past appointments include Chief Scientist at Sustainability A to Z, Director of Designing Safer Chemicals Program at the Yale Center for Green Chemistry and Green Engineering and Guest Researcher at the Laboratory of Computational Biology, National Institutes of Health. Dr. Kostal’s research focuses on computational modeling of organic and enzymatic reactions in condensed phases, computer-aided drug discovery, de novo enzymatic design and the development of novel methods for toxicity prediction and safer chemical design. He holds a B.A. from Middlebury College (Chemistry, Arabic) and a Ph.D. from Yale University (Computational and Biophysical Chemistry).