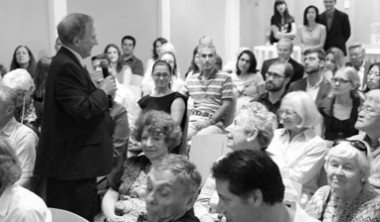 The 8th annual Mutual Inspirations Festival began with nothing less than a big bang on September 21! Before a full hall of green pea color dressed audience, Ambassador of the Czech Republic Hynek Kmoníček opened the festival with remarks about this year’s celebrated Czech personality and founder of modern genetics, Gregor Mendel. Then, Villanova University Professor of Astronomy and Astrophysics Edward Guinan gave a fascinating lecture on Beyond Peas and Genetics - Gregor Mendel’s “Other” Sciences: Bees, Sunspots, Meteorology and Tornadoes.

Guinan dove into Mendel’s scientific papers on sunspots and a tornado, published in 1870, which was the first scientific record of such a meteorological occurrence. Completely intriguing the audience, Guinan, carefully interpreting the paper, mapped out the path of the tornado in the modern day city of Brno and placed the tornado on the Fujita scale. He also praised Mendel in that he did all his scientific research in order to help farmers. For example, Mendel sought to apply his hereditary discoveries on peas to bees to produce higher yields of honey; yet, the outcome was extremely aggressive bees, most probably the first killer bees in the world.

After the speech, the guests were able to enjoy a pea inspired menu prepared by the Embassy Chef and study more about the fascinating life of the monk and scientists via the exhibition Gregor Johann Mendel – Science, Beliefs, Politics, complements of the Mendel Museum in Brno. The evening was concluded with Czech Television’s documentary screening of Mendel – The Father of Genetics, which delve further into Mendel as a man of God versus a man of science.