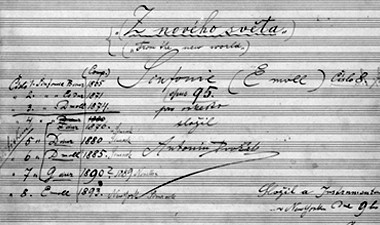 From the New World

Antonín Dvořák is one of the most prominent Czech classical composers of all time. It was his remarkable creativity and progressiveness which gained him fame even in his own lifetime, eventually bringing him for several years to the United States, where he also left an enormous musical footprint. While working in New York City, the composer, coming from humble beginnings in the Czech lands of Central Europe, took in the sounds of Native and African Americans and produced one of the most listened to symphonies on Earth called From the New World in 1893. Seventy six years later, this beautiful piece inspired in yet another new world as U.S. Astronaut Neil Armstrong took man’s first steps on the moon.

Study facsimiles of the New World Symphony and other documents presented by the National Museum of the Czech Republic at the Library of Congress in Washington, DC, from 1 p.m. to 4:30 p.m. on October 1, 2011. 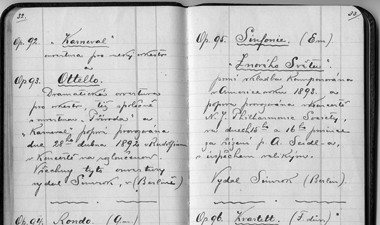 Born in Nelahozeves near Prague to a village innkeeper and butcher, Antonín Dvořák defied following in his father’s footsteps and went on to pursue a career in music. Thanks to the influence of his teacher, Antonín Liehmann, he became an accomplished violinist, organist, and violist, playing viola for the Czech National Theater Orchestra. Dvořák also struggled to become a recognized composer. Through his trials and will to succeed, Dvořák became friends with celebrated composer Johannes Brahms, who greatly influenced him and also connected him with his own publisher. Dvořák’s compositions became a sensation. Among them were his most memorable pieces, the Slavonic Dances, which incorporated the rhythms of Slavic folk dances, demonstrating Dvořák’s passion about his Czech homeland and reflecting his heritage and humble origins. His most renowned works include the New World Symphony, the “American” String Quartet, and the Cello Concerto in B minor. He also composed operas, symphonic, choral, and chamber music.

Enjoy a U.S. premiere of the Homage to Dvořák composed by Miroslav Srnka and performed by the Fama Quartet as a part of the Leading European Composers’ program at the Phillips Collection in Washington, DC, on October 13, 2011. 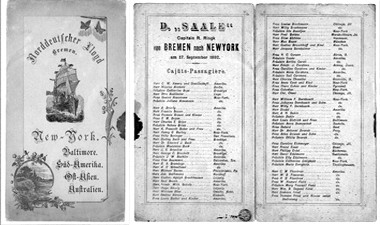 Antonín Dvořák’s fascination with his ethnic roots and folk melodies gained him the attention of the founder of National Conservatory of Music in New York City, Jeanette Thurber, who was paving the way to capture and develop an American music style. Offering him handsome pay, Thurber persuaded the Czech composer to become the director of the conservatory for three years, beginning in 1892. Being greatly inspired by the sounds of America, Dvořák left a great legacy through his music and students in the US, before returning to Prague to subsequently direct the Music Conservatory there from 1901 until his death on May 1, 1904. Today, a statue of Antonín Dvořák stands in Stuyvesant Square Park, near where he resided on 327 East 17th Street, thanks to the Dvorak American Heritage Association, in cooperation with the New York Philharmonic and the Stuyvesant Park Neighborhood Association.

Lay flowers and listen to Dvořák’s music in commemoration of the 170th anniversary of his birth at a Memorial Ceremony in Stuyvesant Square Park in New York City on September 8, 2011. 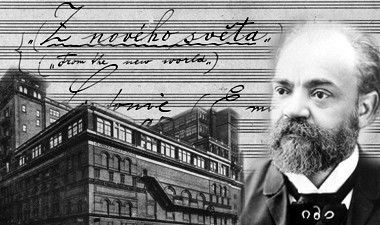 Shortly upon his arrival in the New World from his beloved native lands, Antonín Dvořák directed the Metropolitan (Opera) Orchestra and a chorus of 300 to celebrate the 400th anniversary of the discovery of America. For this commemorative day, Dvořák composed, dedicated, and premiered his Columbian Te Deum. Actually, due to a fire at the Metropolitan Opera House, the celebration was held on October 21, 1892, at Carnegie Hall. Interestingly, however, the concert was preceded by a speech, which was by happenstance called "Two New Worlds: The New World of Columbus and the New World of Music." Seven months later, Antonín Dvořák composed his most famous symphony, From the New World.

Hear the sounds of Antonín Dvořák’s Te Deum performed by the Cathedral Choral Society at the sacred spiritual location and resource for people of all faiths in America, the Washington National Cathedral, on October 28, 2011, being also the National Day of the Czech Republic. 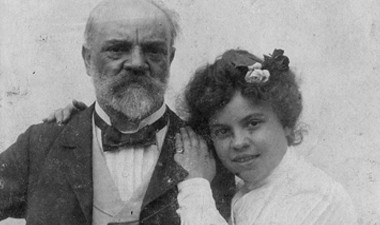 In order to attain the composition and performance of genuine "American" music, Antonín Dvořák believed such a style must be founded on African American and Native American melodies. Being inspired by these sounds of America, Antonín Dvořák wrote his most famous Symphony No. 9 in E Minor “From the New World.”The symphony’s second and third movements evidence Antonín Dvořák’s fascination with Native Americans. Dvořák, however, also spent time with Native Americans and studied their music first hand, while visiting the BilyCloks House in Spillville, Iowa, for the summer of 1893. The same year, on December 16, the Philharmonic Society of New York played the world premiere of the New World Symphony at Carnegie Hall.

Enjoy a special concert of the New World Symphony performed by the Catholic University Orchestra conducted by conductor Murry Sidlin at the National Museum of the American Indian in Washington, DC, at 7 p.m. on September 17, 2011. 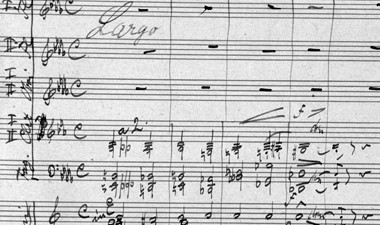 In his pursuit to capture “American” music and contrary to thought at the time, Antonín Dvořák famously envisioned, “In the Negro melodies of America I discover all that is needed for a great and noble school of music.“ Antonín Dvořák was introduced to African American spirituals through his student Henry "Harry" Thacker Burleigh, who later became a prominent African American composer. Burleigh sang for Dvořák the spirituals and plantation songs that he learned from his blind grandfather, who was once a slave. Dvořák encouraged Burleigh to transcribe and perform many of these melodies. Being mutually inspired, Dvořák immersed himself in these sorrow song melodies and spirituals, such as Swing Low, Sweet Chariot, can be heard in the first movement of Dvořák’s New World Symphony.

Listen to the spirituals that Burleigh sang to Antonín Dvořákas well as see the original New World Symphony manuscript on loan from the National Museum of the Czech Republic accompanied by a special symposium with musicologist Michael Beckerman at the Library of Congress in Washington, DC, from 1- 4 p.m. on October 1, 2011. 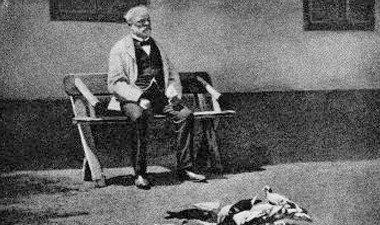 Antonín Dvořák was a devout Roman Catholic. He was baptized in the church of St. Andrew in his village of Nelahozeves. His early years spent there nurtured his strong Christian faith and love for his Bohemian heritage which strongly influenced his music. Antonín Dvořák’s spiritual music furthered his world wide recognition. His profound conviction, Christian ideals, and, especially, his love of nature, viewed as God’s most flawless creation, shaped him as a person and, in turn, his compositions. Demonstrating his sincere faith and modesty, Antonín Dvořák composed his famous “Lužanská” Mass in D Major, premiering in 1887, for the consecration of the chapel in Lužany in the Czech Republic. The mass is a composition originally intended for organ, solo voices, and a small choir.

Gather during Antonín Dvořák’s Lužanská Mass services in the presence of Dominik Duka, the 36th Archbishop of Prague, to celebrate the 170th anniversary of the birth of the composer in the center of catholic life at the Basilica of the National Shrine of the Immaculate Conception in Washington, DC, at 10 a.m. on September 25, 2011. 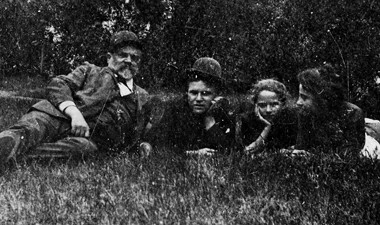 Although Antonín Dvořák was greatly inspired by America, he longed to return to his beloved homeland and so he did for the remainder of his life to continue composing poems and operas based on Czech folk legends, such as the most famous of his ten operas, the fairy tale Rusalka. Dvořák composed the opera by a small lake next to a forest meadow at his beloved Czech summer retreat at Vysoká near Příbram, an enchanting setting for a love story of the opera’s water nymph. Rusalka premiered at the Czech National Theater on March 31, 1901. With Antonín Dvořák’s magic inspiring the new world once again, Rusalka premiered at the Metropolitan Opera on November 11, 1993, and has become a signature role for renowned American soprano Renée Fleming.

Soak in the sounds of the Rusalka opera at a music garden party at the Czech Embassy in Washington, DC, on October 2, 2011, while viewing photographs of the cast of the original performance. 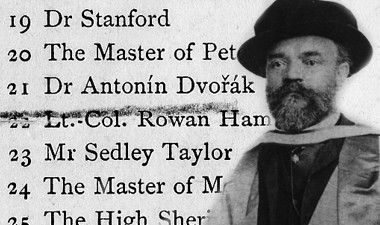 Beyond composing and directing, Antonín Dvořák left an enormous legacy through those he taught at the National Conservatory in New York in his three years there. Dvořák’s students, Henry Burleigh, Will Marion Cook, Rubin Goldmark, Harry Rowe Shelly, and Edwin Franko Goldman, all eventually made meaningful contributions to musical life and literature. They carried the torch of American music to those who would become great American legends. Goldmark taught George Gershwin and instructed Aaron Copland in the fundamentals of counterpoint and composition; Shelly instructed Charles Ives on the organ; and Cook became a pioneer of black musical theater and a mentor to the great jazz composer and performer, Duke Ellington.

Experience the Dvorak Jazz Dances by Charley Gerard performed by Washington Musica Viva at the Kennedy Center Millennium Stage in Washington, DC, at 6 p.m. on October 5, 2011.