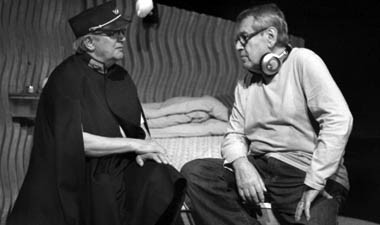 The Avalon Theater will screen Miloš Forman's film A Walk Worthwhile for one night only. The film, based on the jazz opera of the legendary writing duo Jiří Suchý and Jiří Šlitr, was shot during five theatrical shows. Songs from this musical play became renowned in the Czech Republic. The film follows a couple on the brink of divorce until they are bequeathed money for their future child, leading to various escapades to achieve the fortune.

Film Synopsis: Uli and Vanilka are getting a divorce. They are in the middle of sorting out snags in the divorce proceedings with their attorney when a postman delivers two mysterious telegrams from Liverpool. Vanilka’s rich aunt has decided to bequeath to the couple’s future child one million pounds. In the wake of this news, Vanilka, Uli, and the others engage in various escapades with the aim of securing this untold wealth for themselves.

NOTE: The famous stage production of A Walk Worthwhile by legendary writing duo Jiří Suchý and Jiří Šlitr was created for Semafor Theatre (1965). Miloš Forman and Ján Roháč shot A Walk Worthwhile (1966) as a TV film. The new premiere of the theatre production was held in Prague’s National Theatre (2007), directed by Miloš Forman in association with his sons. This gave rise to a new film version, shot during five theatrical shows.

Tickets can be purchased online at www.theavalon.org or at the box office directly.

Click here to view an interview with Miloš Forman at the Karlovy Vary International Film Festival. (The interview is in Czech.)

Click here to watch a piece of the theatrical production (partly in English and Czech.)