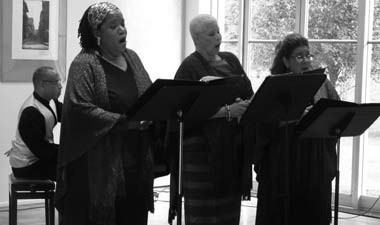 In his opening remarks, Ambassador Gandalovič recalled the situation after the tragic events in New York on September 11th, during which time he served as the Consul General of the Czech Republic to New York. The Ambassador also mentioned two Czechs who died in the World Trade Center. He concluded his remarks paying respects to the victims in not only New York, but also Washington and Pennsylvania, as well as the victims of the continuing war on terrorism.

Guest speaker Daniel Fried, Special Envoy for the Closure of the Guantanamo Detainee Facility, spoke of the “New World” that has resulted from the attacks of 9/11. Additionally, he emphasized the strong partnership between the Czech Republic and the United States of America for paving this strong bond into the future.

Tre Mezzi, comprised of Sylvia Twine, Shawnee Ball, and Kehembe Eichelberger with Everett Williams accompanying on piano, presented a  programof Antonín Dvořák, Henry Burleigh (a student of Dvořák), Duke Ellington (who had been taught by one of Dvořák’s students), among others. The highlight of the evening belonged to the performance of Goin’ Home fromLargo of the New World Symphony which concluded the event.