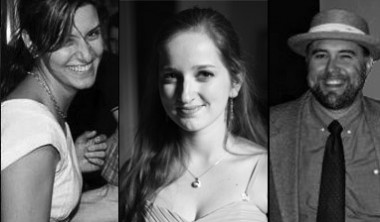 The Embassy of the Czech Republic launches the Mutual Inspirations Festival 2015-Karel Čapek with a jazzy concert by the exceptionally gifted pianist Jana Otáhalová, dancing by the Fidgety Feet duo Kevin Crandell and Lily Matini, and the opening of exhibitions about Karel and Josef Čapek on September 3, 2015, at 6 pm. Savor such upbeat pieces a Ježek's Bugatti Step in a memorable jazz-age evening to kick off the festival.

RSVP required by August 31, 2015
https://festivallaunch.eventbrite.com
Please cut and paste the link into the browser if it does not work directly.

Closest Metro: The Embassy is about a 15-20 minute walk from the Van Ness Metro Station.

ARTIST
Jana Otáhalová has received wide recognizition at national and international piano competitions for her exceptional talent, winning the Grand Prix at both the Anton Rubinstein Piano Competition in Rome, Italy (2014) and the International Music Competition of Sergei Rachmaninov in Madrid, Spain (2014). She has also won first prize at the Joseph Haydn Piano Competition in Vienna (2012), Music Season in Prague (2012), Mozart Wunderkind (2011), International Competition of Franz Liszt in Hungary (2011), among many others. She began studying piano at the age of seven. Currently, she studies classical music under professor Irina Kondratenko and jazz music under professors Jaroslav Wagner and Ondrej Kabrna at the Jaroslav Ježek Conservatory. Her favorite composers include Rachmaninov, Liszt, Ravel and Ježek.

FIDGETY FEET DANCERS
Lily Matini started swing dancing in the fall of 1999; since then she has mastered the Lindy Hop, Balboa and Collegiate Shag. A nationally-ranked competitor since 2003, Matini has won titles at the National Jitterbug Championship, American Lindy Hop Championship, Balboa Rendezvous, Swing Fling, Ultimate Lindy Hop Showdown, Rhythmic Arts Championships, and the Virginia State Open. Matini has appeared in numerous films, TV programs, news specials, and tributes, most notably performing for an audience of over 140,000 WWII veterans, as well as President Bush and Tom Hanks, at the WWII Memorial Dedication in Washington, DC, in 2004.

Kevin Crandell has been dancing since 2001. In addition to dancing with Fidgety Feet, he teaches a beginner and intermediate swing dance class with fellow teammate Lily Matini for Gottaswing LLC in Washington, DC.

EXHIBITIONS
Presented by the Karel Čapek Memorial, the exhibitions The Life and Times of the Writer Karel Čapek (1890 - 1938) and Josef Čapek: Painter, Poet and Writer reveal an intimate portrait of the author and his brother through pictures and excerpts from their work.