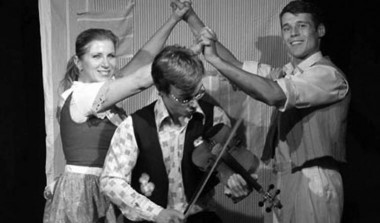 Theater Viola brings Endele Vendele to the Kennedy Center Millennium Stage on October 28, at 6 pm, as part of the Kids Europe Festival. Almost everyone enjoys a tall tale—kids, moms and dads, grandmoms and grandads. In this workshop, children and their favorite grown-ups can discover the folk and fairytale traditions of the Czech Republic, and learn some fables, riddles, and songs to tell and sing at home for relatives and friends. Grandad wants to pull an enormous beet out of his garden, but he can’t do it without some help! Become a barnyard hero playing the role of a brave hen who saves a rooster in distress! These are just a couple of the funny scenes from Endele Vendele, which has toured many European countries, including Germany, Great Britain, and Belgium. Come and be a part of the Washington premiere!

These events are also part of the Kids Euro Festival (www.kidseurofestival.org) taking place throughout the Washington, DC area from October 24 to November 8. The largest children's performing arts festival of its kind in the United States, Kids Euro Festival has annually offered more than 150 free events for children and their families since 2008. This Festival is presented by the 28 embassies of the European Union and more than 20 American cultural institutions, and is made possible by the European-American Cultural Foundation in cooperation with the EU Delegation to the United States, Washington Performing Arts, the DC Arts & Humanities Education Collaborative, and DC Public Libraries.

Admission is free. No RSVP required.