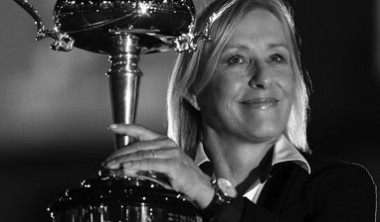 “Don’t let age define your identity or govern what you can or can’t do.” ~Martina Navrátilová

Martina Navrátilová is a living legend, the best tennis player of all time, among men or women, with 59 Grand Slam titles and a record 9 Wimbledon singles championships. Beyond her unmatched records, she has become an inspirational leader to rising stars, women, and minorities. She is a fierce advocate for human rights, healthy living and animals. 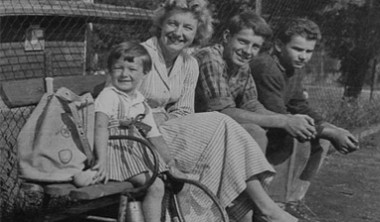 
“He was a father to me in every sense of the word.” ~Martina Navrátilova
Living in a single room with her mom overlooking a red-clay tennis court, Martina began playing tennis at the age of 4. She is not the first tennis star in her family, following in her maternal grandmother’s footsteps and beyond. Yet, it was her “second” father who took the self-described court rat under his wing and became her coach. It was his energy and enthusiasm that gave her a chance at tennis. He would hit the balls with her for hours, telling her that she will be a champion one day. Happy and proud to be his daughter, Martina took his last name. Convinced Martina could win Wimbledon, her father took the then nine year old to George Parma, the best coach in the then former communist Czechoslovakia. Immediately recognizing talent, he refined her game but still let her play aggressive. Martina was proud to commute after her regular schooling to lessons with him in Prague, dreaming of being famous one day. 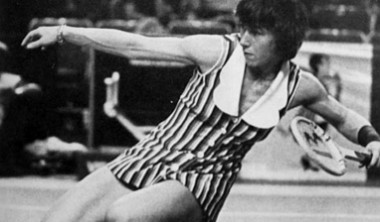 
“From the time I was little, I thought of America as a magical place.” ~Martina Navrátilová
Martina was 11 when the Soviets invaded Czechoslovakia in 1968 subduing a period of political liberalization known as the Prague Spring. Reflecting on the experience, Martina said, "I saw my country lose its soul." She saw how the society’s hopes were dashed and the people were gloomy and negative about the future. Coach Parma’s advice that sports is the way she will be able to travel resonated with her. Parma himself was in Austria when the tanks rolled in and never came back. Hence, her father again became her coach.  Still, playing tennis in a communist-run state, she had to receive permission to travel abroad, being told how to train, what tournaments to enter. Being headstrong, Martina wanted to be herself, which she could in America. With only her father knowing her plans, Martina defected to the US while competing at the US Open in 1975 at the age of 18 to follow her aspirations of playing tennis, excelling in both singles and doubles. 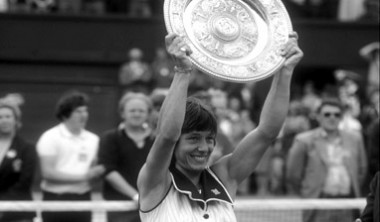 "I think the key is for women not to set any limits." ~Martina Navrátilová

Martina sensed the freedom in America and admired its women for doing what they wanted to do, making decisions, being professionals. Several made ever lasting impressions on her such as Billie Jean King, the great player who turned women’s tennis into a big-time event. Martina also liked the food. Growing up on traditional Czech dishes spread out over the course of a day, Martina was slim growing up but, indulging on Big Macs and fries, she struggled with her weight when she got to the US. Still, Martina won her first major singles title at Wimbledon in 1978, defeating her greatest rival Chris Evert in three sets in the final and captured the World No. 1 ranking for the first time. Martina defended her Wimbledon title in 1979, again beating Evert. However, after Evert crushed Martina in 1981 in the finals of the Women’s Tennis Association championships, Martina began working with basketball’s “Lady Magic,” Nancy Lieberman, who helped Martina overhaul her fitness. She also teamed up with a coach, Renee Richards, who helped with her mental focus. 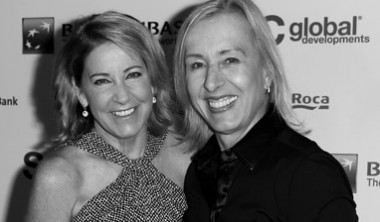 "Tennis has given me soul." ~Martina Navrátilová

The hours in the gym paid off. Martina was in the best shape of her career and the confidence showed.  She had the ultimate serve-and-volley game and ardent determination to be the best.  Still, she lost the 1982 US Open due to her severe sickness from toxoplasmosis she caught from eating an uncooked hamburger. By 1983, she was ready to again claim the number one spot with a new coach, Mike Estep. After working on her strategy, Martina finally won the US Open, beating Chris Evert. In fact, the Navrátilová-Evert on court fierce rivalry for dominance in women's tennis is one of the greatest in any sport’s history. Between 1973 and 1988, the Grand Slam champs faced each other 80 times. The media portrayed Martina as the outsider, the defector, the immigrant. Martina was always very outspoken and emotional, a personality trait she gained from her birth father. Her persona was the opposite of the feminine, even-keeled Chris Evert, who was "America's Sweetheart.” Despite their epic rivalry, different playing styles, and contrary on court demeanor, they became very close friends and even doubles partners, winning at Wimbledon and the French Open together. 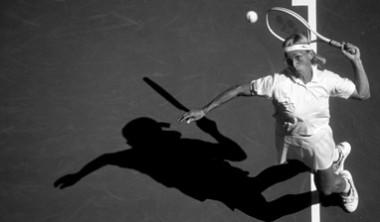 “I didn’t imagine my sexuality would become a major issue to anybody." ~Martina Navrátilová

Martina became known for taking women’s tennis to an entirely new level with her speed, aggression, and fitness.  Still, in her quest to become one of the greatest athletes of all times, Martina had to overcome several hurdles in her life. Her image especially suffered when it became known that she was gay. Her public declaration in those times cost her millions in endorsement dollars. Even her parents didn’t understand initially, accusing Martina of being overly sensitive and revealing her emotive birth father committed suicide when she was young. Martina struggled with her image throughout her career but remained a strong proponent for the rights of the LGBT community, speaking at the 2000 Millennium March in Washington, DC.  She married her wife in New York in 2014 and together they raise two daughters and numerous adorable purebreds and mutts. 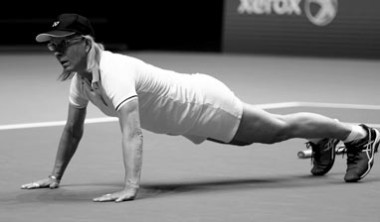 “The ball doesn’t know how old I am.” ~Martina Navrátilová

Another great challenge that Martina conquered was controlling her diet. During her first visit to the US in 1973, Martina put on 20 pounds in just two weeks, discovering the foods on the other side of the Iron Curtain. She lost the weight naturally when she returned home to an active routine. However, after her defection, Martina ballooned to 170 pounds. People thought she was lonely but in reality Martina lacked the proper knowledge about nutrition and exercise. Fast forward the course of a career that spanned an amazing four decades, Martina is a leader on personal fitness and healthy living, attested by her own comeback from retirement at the age of 43. Her diet and work ethic ultimately resulted in her being selected to represent the US at the Olympics in 2004, her first Olympics. Although losing in the quarterfinals, she became the oldest Olympic tennis player in the history of the Games. Moreover, Martina captured her final grand slam title in mixed doubles a month shy of her 50th birthday!  Still, she praises her mom for being a great role model in teaching her just how important sports are for young girls. 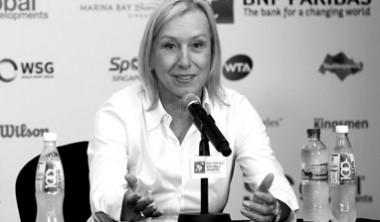 
"You don't forget the day when your life is completely changed forever. Although I did not hear the word cancer, your biopsies (are) positive. I am like 'positive is usually good, wait a minute, that is not good, what does it mean?'" ~Martina Navrátilová
Martina’s beloved grandma was also a great inspiration. She would make her special carrot salad, urging young Martina, “Eat it. It’s good for your eyes. You will see the ball better.” Unfortunately, despite all the advice and wisdom, some things cannot be prevented. In 2010, after putting off annual mammograms, Martina was diagnosed at the age of 53 with breast cancer. She underwent a lumpectomy to remove the cancerous cells and, staying true to herself, she competed less than two weeks later in the 24.9-mile cycling portion of a triathlon in Hawaii. As for the second part of her cancer treatment, Martina endured a six week radiation treatment in Paris so that she could do commentary on the French Open during that period as well as compete with the 1998 Wimbledon champion Jana Novotna in the legends doubles tournament, which coincided with weeks three and four of her treatment. Despite not feeling completely well, she won with Novotna. Martina now advocates for women to receive regular checkups. 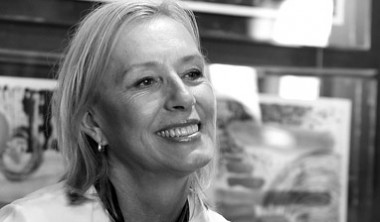 
“You never regret new experiences, only the ones you missed.” ~Martina Navrátilová
Surviving breast cancer, Martina has continued to live her life to the fullest. The tennis legend with a record 167 singles and 177 doubles championships will turn 60 this October and remains to be the oldest winner of a grand slam title, male or female. She won a record nine Wimbledons, including six consecutively. Still, Martina credits her childhood in former Czechoslovakia where she saw women having families, jobs and playing sports with an innate sense that sports are good for you as well as fun. Her mother played volleyball and tennis and Martina learned to love and play a variety of sports, which continues to help her fitness. Martina now fights childhood obesity in America by promoting physical activity and good eating habits. She emphasizes that girls who play sports have higher self-esteem and excel in school. She also works with various charities benefiting underprivileged children.