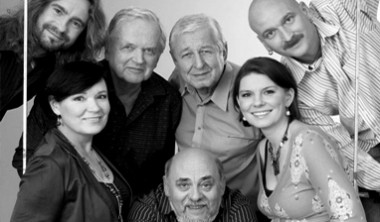 The Embassy of the Czech Republic presents the Czech folk group Spiritual Kvintet on November 10, 2019, at 5 pm.  The group performed at demonstrations during the Velvet Revolution as well as for former Czech President Václav Havel and US Presidents George H. W. Bush and Bill Clinton. The group's repertoire includes original compositions as well as renaissance, folk, and spiritual music.  Relish in an afternoon with these Czech founders of folk.
ABOUT THE GROUP:
Spiritual Kvintet formed in 1960 as the first folk group in then Czechoslovakia. In 1964, the group performed at concerts of the world-famous American musician and folk enthusiast Pete Seeger in Prague and other cities.

Due to its musical variety, the group was banned for some time under communism. During the Velvet Revolution, the soon-to-be President Václav Havel invited the group to perform before 200,000 demonstrators in Wenceslaus Square in Prague on November 23, 1989. During the Velvet Revolution’s first anniversary, the group played again and, this time, US President George H. W. Bush and President Havel sang along to the song, “We Shall Overcome!” The band has also performed for US President Bill Clinton.  Spiritual Kvintet has recorded over twenty albums, visited most European countries, the United States, Canada, and Australia.
The group is returning for the second time to the United States. Its first visit was in 1993 to New York, Chicago and Washington. During the thirty years under the totalitarian regime, songs from America inspired the band as songs of freedom. Next year in 2020, the Spiritual Kvintet will celebrate its 60th year and will disband.
EVENT DETAILS:
Date/Time: November 10, 2019, 5 pm
Venue: Embassy of the Czech Republic
3900 Spring of Freedom Street, NW, Washington, DC 20008

Embassy Security Policy: For entrance, all guests will be subject to security screening. Photo ID is required. Bags and suitcase are not allowed. Only small purses are permitted but must be opened for inspection. Coat check is not available.

Closest Metro: The Embassy is about a 15-20 minute walk from the Van Ness Metro Station.
czech.cz
© 2011-2020 Embassy of the Czech Republic in Washington, DC
www.mzv.cz/washington
facebook
RSS