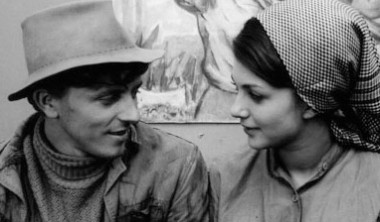 Bistro Bohem will screen director Jiří Menzel's Larks on a String (Skřivánci na niti) on September 17, 2019, at 7 pm. In the film, a group of middle class citizens are sent to work at an industrial junkyard in order to be ‘rehabilitated.’ The film was initially banned and released in 1990 after the fall of the communist regime. The film won the Golden Bear at the Berlin International Film Festival (1990). Delve into this classic film from the 1960s. (Dir. Jiří Menzel, Czech with English subtitles)

Like Marta Kubišová, Menzel was subject to the censorship of the communist regime. With the occupation of Czechoslovakia by Warsaw Pact forces in 1968, and the period of so-called ‘normalization’ that followed, Menzel was one of the first directors to be barred from filmmaking. However, he persevered, becoming one of the most revered Czech directors to this day.

Event Details:
Date/Time: September 17, 2019, at 7:00 pm
Venue: Bistro Bohem
600 Florida Avenue, NW, Washington, DC 20008
RSVP required:
202/735-5895 or bistrobohem@gmail.com | Admission is free!
Guests must arrive by 6:45 pm to keep their reservation.
Website: www.BistroBohem.com
Admission is free.
About the Series: This marks the eighth year of the Film and Beer Series at Bistro Bohem. This year, the series will focus on films by award-winning director, screenwriter, actor, and theater director - Jiří Menzel. All films will screen in Czech with English subtitles. Each screening includes one free beer as well as an introduction by a representative from the Czech Embassy. All screenings are subject to change.
About the Director:
Jiří Menzel studied filmmaking at the famous Film and Television Academy of the Performing Arts (FAMU) in Prague, Czech Republic. He was one of the leaders of the Czechoslovak New Wave. Most notably, Menzel won an Oscar for Best Foreign Language Film for his first feature-length film Closely Watched Trains (Ostře sledované vlaky, 1967).
His film My Sweet Little Village (Vesničko má středisková, 1985) was nominated for the Best Foreign Language Film. Other renowned works include Capricious Summer (Rozmarné léto, 1968), Cutting It Short (Postřižiny, 1981) and I Serve the King of England (Obsluhoval jsem anglického krále, 2006).
Menzel is a member of the Czech Film and Television Academy, the European Film Academy and the Academy of Motion Picture Arts and Sciences. He has received many prestigious awards, among them the French order of Chevalier des Arts et des Lettres and the Akira Kurosawa Prize for a lifetime’s achievement at the San Francisco Film Festival.
czech.cz
© 2011-2020 Embassy of the Czech Republic in Washington, DC
www.mzv.cz/washington
facebook
RSS