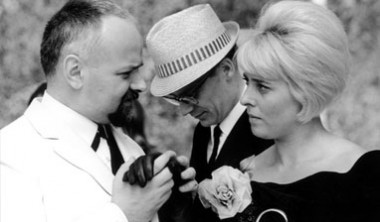 Notice: The National Gallery of Art will be closed on Saturday due to the Government shutdown. Therefore, the screening mentioned below will not be taking place.  Please stay posted for any additional updates.

The National Gallery of Art opens a special film program entitled "The Play's the Thing:" Václav Havel, Art and Politics on October 5, at 2 pm, with screenings of The Uninvited Guest and Every Man, followed The Mist and A Report on Party and Guests at 4:30 pm. Honor the 77th anniversary of Havel's birth through this program delving into the nuances of his extraordinary life.
Photo courtesy of the Czech Center in Prague

The Play’s the Thing:  Václav Havel, Art and Politics
Václav Havel (1936-2011), the dissident and imprisoned dramatist who went on to become world renowned statesman as first president of the Czech Republic, changed the course of twentieth-century history by mixing theater with politics and peacefully ending communism in his country. His plays, filled with metaphor and pointed innuendo, exposed the failings of the system, and Havel became a hero in an epic struggle. This program is based on the places and people that Havel knew, from the influential Theatre on the Balustrade where his theatrical career began, to his friendships with filmmakers of the Czech New Wave, to his political ascendancy in Prague.

When a boorish official enters a young couple’s flat and makes himself at home, it soon becomes apparent that all of the flats in the building face the same dilemma—each has its own private intruder. After completing this short parable on socialist living, director Venclík was forbidden to make films for twenty years.

A soldier’s life under socialism is the focus of Every Young Man, Pavel Juráček’s absurdist drama in two parts. The first part follows a young recruit and his corporal on an outing into town to find a doctor (Václav Havel has a role as a patient awaiting treatment), while the second is set in an army camp, as young soldiers tackle their daily routines. The film ends with a heart-rending and unforgettable dancehall sequence.

In the early 1960s, Prague’s celebrated Theatre on the Balustrade was a center for experimentation, mime, and theatre of the absurd. It’s the place where Václav Havel began as a dramaturg and stage hand, and where his plays were later produced. The Mist poetically captures this famous theater from different perspectives, as well as other Prague landmarks at dawn.

A pleasant afternoon outing is cut short when some pushy intruders force a group of friends to play a round of officious party games. Jan Němec’s absurdist parable on the behavior of authority figures is a landmark of the Czech new wave of the brief Prague Spring.

Admission is free. | Reservations are not required.