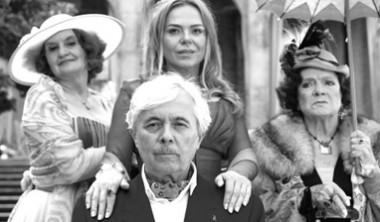 We regret to inform you that due to the government shutdown this event has been canceled.

The National Gallery of Art will screen Leaving on October 13, at 4 pm, in the East Building Auditorium as part of the film program "The Play's the Thing:" Václav Havel, Art and Politics.
Photo courtesy of the Czech Center in Prague

The Play’s the Thing:  Václav Havel, Art and Politics
Václav Havel (1936-2011), the dissident and imprisoned dramatist who went on to become  world renowned statesman as first president of the Czech Republic, changed the course of twentieth-century history by mixing theater with politics and peacefully ending communism in his country. His plays, filled with metaphor and pointed innuendo, exposed the failings of the system, and Havel became a hero in an epic struggle. This program is based on the places and people that Havel knew, from the influential Theatre on the Balustrade where his theatrical career began, to his friendships with filmmakers of the Czech New Wave, to his political ascendancy in Prague.

Leaving (Odcházení)
In 2008, Havel returned to the theater with a new play, Leaving (Odcházení), in which an ex-government official tries to reenter his former life. His film version premiered shortly before his death in December 2011. As the action unfolds on a rural estate, comparisons to Havel’s own life become clear: “Before the 1989 Revolution, I had an idea for a character like King Lear, who loses power. It might have been the influence of the 1968 generation—the people who had been party members… after ’68 they were thrown out and started to live ordinary lives, and pretended they didn’t mind, but they did”—Václav Havel. (Václav Havel, 2011, Czech with English subtitles, 94 minutes)