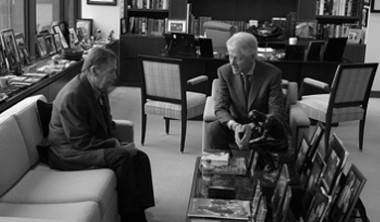 The Avalon Theater will screen the documentary Václav Havel, Prague - Castle (Václav Havel, Praha - Hrad) by Czech director Petr Jančárek as part of the Lions of Czech Film Series on September 11, at 8 pm. The documentary takes viewers inside the Castle, presenting an up close and personal portrait of the former President of the Czech Republic. The film also chronicles Havel’s first trips to European countries, the USA and the Soviet Union, as well as the first visits of Pope John Paul II and the Dalai Lama to the former Czechoslovakia. Explore the many layers of Havel's life through this extraordinary documentary.
Photo courtesy of Petr Jančárek

The film unveils the earliest days of Václav Havel's presidency, as told by members of Havel's inner circle and the playwright himself, including the arrival of his team to Prague Castle in the wake of the turbulent 1989 elections and his historic speech to the U.S. Congress. Havel and his advisors' immediate goal was to lead the country to its first free elections as quickly as possible. Interviews with Havel, his advisors and staff, as well as former U.S. Secretary of State Madeleine Albright and others, tell the story of a truly unique period in the history of the former Czechoslovakia and the complex personality of Havel, who suddenly went from being a dissident to becoming the head of a free democratic state. The film also chronicles his first trips to European countries, the USA and the Soviet Union, as well as the first visits of Pope John Paul II and the Dalai Lama to the former Czechoslovakia. Discover the character of Václav Havel as seen through the eyes of those around him.

Tickets may be purchased at the box office or online at www.theavalon.org.