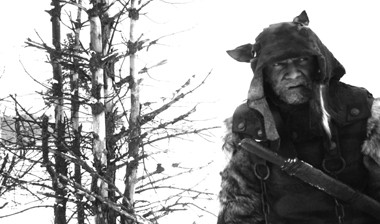 The Embassy of the Czech Republic welcomes renowned Czech film historian and author Pavel Jiras on October 4, at 6:30 pm. He will open the photo exhibition František Vláčil’s Studio and lecture on the paths taken by František Vláčil and Miloš Forman to becoming masters of cinematography. The event will include a documentary about Vláčil’s life and work.

About the Exhibition:
On view from October 4-30, the exhibition presents a look inside Czech film director František Vláčil's work. Take a sneak peek into the epic director’s studio via an artistic, black and white photo exhibition, featuring production stills of the film Marketa Lazarová, voted the all-time best Czech movie in a prestigious 1998 poll of Czech film critics and publicists.

Czech director František Vláčil is well known for the extraordinarily high artistic quality of his films. He was a passionately focused creator, for whom the most essential purpose was the movement of the film’s story through the means of a flawless sequence of visual presentation rather than dialogue. Vláčil worked in his private atelier, which was extremely important to him as it was the place where the preparation and concept – the unseen picture - came together. He used photographs, drawings from scenes, notes and personal items. The atelier was the basis for his director’s approach to making film. It was a place where he could immerse himself in his preparation, which was so thorough, skillfully drawn and noted that certain sequences could even be completed by assistant directors.

About František Vláčil:
František Vláčil was born in Český Těšín, Silesia, on February 19, 1924 and died in Prague, on January 27, 1999. He studied at the Prague Academy of Arts, Architecture and Design, with the ambition to pursue a career as an artist, but he soon switched to studies of Art History and Aesthetics in Brno. From the early stages of his university studies, he focused primarily on the cinematic medium, distinct traces of his initial choice remained continuously present in his characteristic emphasis on the artistic attributes of visual representation. Vláčil’s dominant 1960s achievement was the trilogy of historical dramas, marking the key stage of his artistic development. The films, Ďáblova past (The Devil's Trap, 1961), Marketa Lazarová (1967), and Údolí včel (The Valley of the Bees, 1967), each telling its own balladic story of a solitary individual grappling with fate's trials and tribulations and with incomprehension on the part of their contemporaries, together represent a highlight in the history of Czech filmmaking. As the director stated, “What I was concerned with in Marketa Lazarová was primarily one thing: namely, to make a statement about people living some six or seven centuries ago as though they were our contemporaries.”

About Pavel Jiras:
Pavel Jiras is a film historian, actor, poet, publicist and author of many exhibitions relating to Czech film.  He is also the curator of the film archive at Barrandov film studios. Due to much public interest, Jiras coauthored with Josef Frais a four part collection of picture biographies of Lída Baarová, Adina Mandlová, Oldřich Nový and Vlasta Burian. Jiras has also published several studies of the history of Barrandov: Barrandov I- Rise to the Top (2003), Barrandov II- Golden Era (2004), and Barrandov III- Oasis Among the Demons (2006). He is currently working on a fourth edition, which will include events from 1945 to 1989. Jiras considers the pinnacle of his exhibitions to be the display František Vláčil- Struggles at the Prague Castle in 2008.  He is a member of the Academy of Sciences and Arts in Salzburg and a founding member of the Prague Rotary Club.

Reservations are required.
For reservations, e-mail reservations@mutualinspirations.org and put "Jiras" in the subject line.