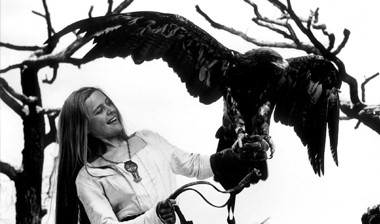 The National Gallery of Art and the AFI Silver Theater present two enriching programs on October 7, as part of the festival. Please be sure to scroll down to view both events, listed in order by time.

AFI SHOWCASE: Valmont
On October 7, at 11 am, the AFI Silver Theater and Cultural Center will screen Valmont. Set in Baroque France, a scheming widow (Annette Bening) and her lover Valmont (Colin Firth) make a bet regarding the corruption of a recently married young woman. Valmont bets that he can seduce the honorable woman. However, in the process of seducing her, he falls in love. (DIR. Miloš Forman, 1989, 137 min., English)


MASTERS OF CINEMA: František Vláčil
Director František Vláčil's films are well-known for their extraordinary high art quality. Czech critics and industry experts voted his epic Marketa Lazarová (1967) the best Czech film of all time. Spend an afternoon at the National Gallery of Art exploring the work of this monumental director watching films such as the Devil’s Trap (Ďáblova past) and the premiere of the restoration Markéta Lazarová in the East Building Auditorium on October 7, begining at 2 pm.

October 7, 2 pm
The Devil’s Trap
In a drought-stricken Bohemian village, a church inquisitor probes the local miller to find out if his flourishing grain mill is the work of the devil. In this first of Vlačíl’s three historical-allegorical epics, the miller’s discovery of an underground aquifer and his subsequent success have become a source of ridicule from villagers. “The opening shot of a gnarled effigy of Christ in agony, dwarfing a distant figure on the horizon, neatly establishes a cruel world where religious authority holds absolute sway and an innocent miller’s knowledge of the land’s natural properties is interpreted as evidence of a diabolical pact”—Michael Brooke. (1962, 85 minutes, Czech with English subtitles)

One of only a handful of filmmakers who has ever tried to recreate the mood of medieval society, Vláčil based Marketa Lazarová on Vladislav Vančura’s best-selling 1931 novel, in turn based on a story handed down within Vančura’s family. Sets and costumes were made with traditional tools, and actors tried to portray the raw and unfiltered emotions that presumably prevailed. Heroine Markéta, kidnapped and forced to serve an enemy clan, finds refuge in the orderliness of religion. Zdeněk Liška’s musical score mixes vocal, percussive, and electronic motifs that beautifully buttress the narrative. (1967, DCP, 180 minutes, Czech with English subtitles)

To František Vláčil, Marketa Lazarová was a truly portentous work. Having invested into this film all his creative powers, joy and energy, he himself began to divide his life to "the stage before Marketa, and the part after it." He created an art work that was "shatteringly beautiful", "spellbinding", eliciting emotion, passion or antipathy, a work open to ever new readings in the same way as are a poem, a thought-provoking question, a source of inspiration, or a call... The film's final scene shows a wide plain over which carries the voice of the monk, Bernard, calling out: "Marketa... Wait, Marketa..." Still today, nearly half a century from the film's making, his calls keep echoing in our time, in our lives.~Petr Gajdošík

About František Vláčil:
Born in Český Těšín, Silesia, on February 19, 1924 and died in Prague, on January 27, 1999. He studied at the Prague Academy of Arts, Architecture and Design, with the ambition to pursue a career as an artist, but he soon switched to studies of Art History and Aesthetics in Brno. From the early stages of his university studies, he focused primarily on the cinematic medium, distinct traces of his initial choice remained continuously present in his characteristic emphasis on the artistic attributes of visual representation. Vláčil’s dominant 1960s achievement was the trilogy of historical dramas, marking the key stage of his artistic development. The films, Ďáblova past (The Devil's Trap, 1961), Marketa Lazarová (1967), and Údolí včel (The Valley of the Bees, 1967), each telling its own balladic story of a solitary individual grappling with fate's trials and tribulations and with incomprehension on the part of their contemporaries, together represent a highlight in the history of Czech filmmaking. As the director stated, “What I was concerned with in Markéta Lazarová was primarily one thing: namely, to make a statement about people living some six or seven centuries ago as though they were our contemporaries.”

Program Note:
František Vláčil’s (1924-1999) historical pageants summon a far-off time and place in a naturalistic style that suited his training in aesthetics and art history. His relatively small body of work stands out from the gritty Czech New Wave films of the era and, not surprisingly, was seen as subversive by censors in his native Czech Republic. Thwarted after the 1968 Soviet invasion, Vláčil maintained that he was only interested in “pure film” and applying poetic license to shape allegory from ancient tales. His work suggests parallels to other metaphorically rich work of the last century including films by Tarkovsky, Bergman, and Eisenstein. This program encompasses his best known epics and includes the premiere of the new restoration of the medieval Marketa Lazarová.